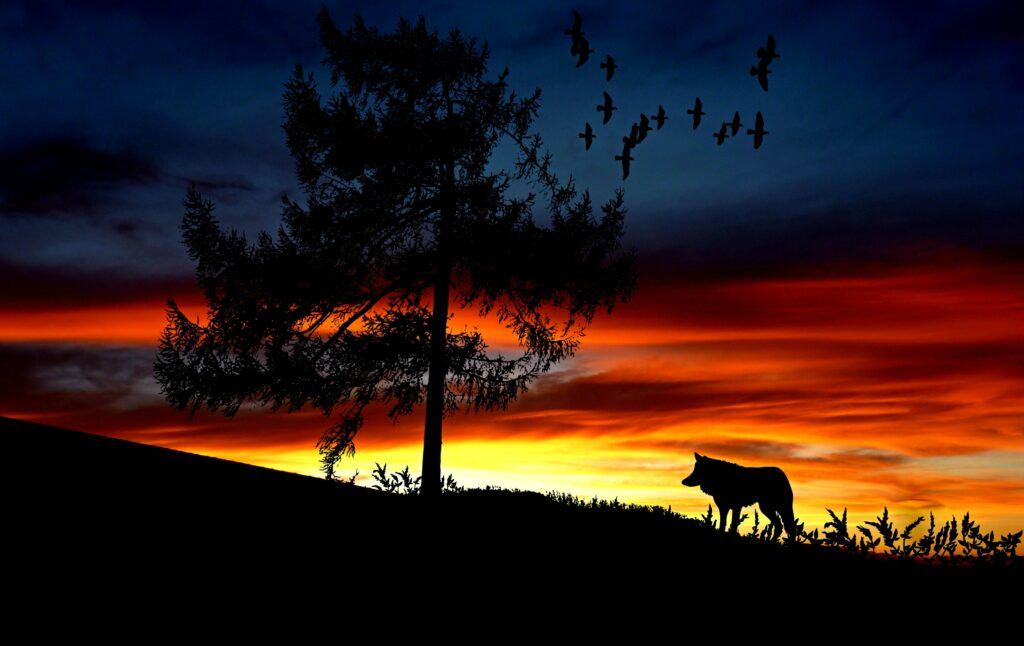 History of Wolves in Spain

The Wolves of Spain are the stuff of legend and not in a good way. There are thought to be over 70 different expressions Spaniards have used traditionally to avoid saying the word “Lobo” (Spanish for Wolf), afraid of invoking the animal to appear out of thin air to wreak havoc. The Iberian Wolf has been portrayed in cave paintings in the region, so its direct relationship with Europeans is much older than the relationship with the ancestors of Europeans that colonized North America. It seems that the early European settlers to North America also brought with them and passed down their opinions of this animal, which has had disastrous effects on the wolves of North America. The Spanish Wolf appears in ancient artwork, pottery, and dishes and often reflects the perceived hellish nature of the “beast.” In the middle ages, fanciful folktales of werewolves (lobishomes) appeared on the Iberian Peninsula. With all of this fear and hatred, it’s a wonder there are enough of these wolves left today to be a concern to anyone. Their numbers in Spain, however, are on the rise. Spain actually now has the largest population of wolves in Western Europe. The country has just extended a hunting ban that has sharply divided its citizens.

Disclaimer: Some images on this post may be upsetting to some readers.

The growth of the population comes in part from the migration of people from the countryside to cities. This has led to an increase in natural vegetation, which has helped boost deer and wild boar populations. As a result, wolves have more prey and fewer humans to be wary of. In recent years, many in Spain have come to see the animal as worthy of protection. All of this has led to a rise in numbers.

Today it is estimated there are 2500 wolves in Spain. Officials base this on reproductive individuals, which is misleading since not every individual gets a chance to reproduce (that’s not how wolves work). Wolves live in a hierarchical pack, and only the alphas reproduce. Scientists predict that government estimates are 30 to 50% too high. The number of wolves that are allowed to be killed each year is based on these faulty assumptions and is considered unsustainable by environmental groups. To further complicate things, wolves are managed separately by region, which includes national parks. In some areas, they are game animals that can be hunted, but are fully protected in other areas.

Even if 2500 wolves are roaming the Spanish countryside, you would be lucky to spot one. Like all wolves, these canids are wary of humans, which makes actual sightings rare. If you want to see an Iberian wolf in the wild, your best chance would be to visit Northern Zamora, where their population density is the highest.

Some People are Concerned about the Rebound of the Spanish Wolf

Spanish wolves rely on roe deer, wild boar, and livestock for food. It’s that last one that tends to keep the rural attitude towards them negative. Urbanites, however, generally view wolves more positively. One example of the irrational views of some farmers in Spain comes from an article in the Irish Times from 2015. Farmer Jacinto Serranos (pictured above) claims he can’t sleep at night because he is so fearful wolves will attack. He is quoted as saying: “It’s a typical wolf attack, it’s what they do” they kill for the sake of killing, for fun.”

I think he is a little dramatic in this interview. I get that he has suffered financially because a wolf killed the calf, but I’m sure the wolf didn’t do it for fun. According to the Idaho-based advocacy group, Living with Wolves, the wolf doesn’t kill for fun as people do. Instead, they are usually scared away from their kills by other predators or humans who may not even know they are approaching the animal. A dead uneaten carcass leaves the perception they did it only to kill and not to eat. There have been cases of wolves engaging in surplus killing⸺killing more than they could eat⸺but this is very rare. I think Jacinto would sleep better if he invested in some dogs, and beefed up preventative measures on his farm, and educated himself on this predator.

Yes, wolves kill 15,000 farm animals in Spain each year but eliminating an entire species off the face of the earth as a solution is just lazy problem-solving. A common-sense approach would be to get more accurate numbers of the population and then create a sustainable hunting program that maintains a healthy number of wolves. Developing a compensation program for farmers for losing an animal to a wolf would also go a long way. Finally, wolf education (as opposed to folk tales) and help modifying farms to prevent attacks would encourage co-existence – instead of what we see pictured below.

By all accounts, Spain’s methods of Wolf Control have been brutal. Spaniards kill many wolves illegally, and one of the most brutal methods employed is wire trapping. A wire trap catches the wolf around the abdomen. The wire cuts into the flesh and blocks the intestines. While the wolf is fully alive, the wolf’s intestines start to bloat. When the pressure is high enough, either the intestines burst outside or explode within the body—a brutal and painful way to die.

Laura Serrano Isla says, “there have always been wolves. We, humans, have hunted and killed all the animals around us because we want everything for ourselves,” She has a flock of 650 sheep near Burgos in the Spanish North West.

“We think we rule the world, but if we kill all the rest of the animals, the wolf will come for our livestock.” This progressive view has put her at odds with many of her fellow farmers. They claim that any bans on hunting threaten not only their livestock but also their way of life. Environmentalists disagree about the damage wolves cause stating that no one knows. Some farmers do not report attacks, while others blow them out of proportion. While 15,000 animals a year is a significant number, it loses its weight when put in the context of the total population of cows, sheep, and goats in Spain – 30 million.

Another farmer uses over 20 Mastiff dogs to protect his 120 cows. He also supports the hunting ban saying that wolves clean up nature. They eat dead livestock and therefore prevent sickness from spreading among his other animals.

What the Future Holds for the Wolves of Spain

The future of the wolves of Spain is uncertain, but support is growing.

European citizens support protection for wolves, and the majority oppose the killing of wolves in any circumstances. This is the main outcome of an opinion poll among adults across six EU countries commissioned by Eurogroup for Animals. It’s time for politicians to listen to the voice of their electors and ensure that the species continues to be strictly protected. Conducted by​Savanta ComRes in six EU member states – France, Germany, Italy, Spain, Poland and Finland the survey aimed to better understand public perceptions and attitudes towards wolf protection across Europe. (Source: International Wolf Center)

Spain is slightly smaller than the US state of Texas, with a similar population size. Wolves are increasing in numbers and are concentrated mainly in the northern region. The potential for more interaction with livestock and thus conflict with humans is likely to drive political decision-making in the wrong direction for wolves. They seem to have a new ally in city-dwellers; this might mitigate politically motivated actions aimed at total elimination, as we see in Idaho and Montana. If the wolf has any future in Spain, environmentalists will have to find a way to work with rural farmers, landowners, and elected officials with the goal of coexistence. Maybe then poor Jancinito will be able to sleep at night.

How can you Help?

You could consider a donation to the International Wolf Foundation. With your support, they aim to spread the facts about wolves and work to ensure their survival around the globe. Their mission is:

The International Wolf Center advances the survival of wolf populations by teaching about wolves, their relationship to wildlands and the human role in their future.

Another great organization is the Defenders of Wildlife. Their mission is:

Defenders of Wildlife is dedicated to the protection of all native animals and plants in their natural communities.

Founded in 1947, Defenders of Wildlife is the premier U.S.-based national conservation organization dedicated to the protection and restoration of imperiled species and their habitats in North America.

10 thoughts on “Wolves of Spain – Some Spaniards are Freaking Out!”