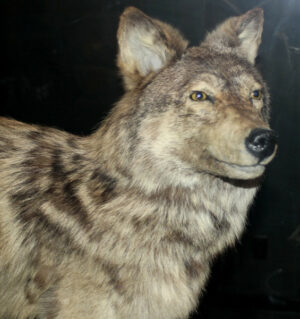 As mentioned on my “About Me” page, I fell in love with wolves on a rainy trip to our cabin at Grandy’s River, Newfoundland. I was reading “Never Cry Wolf” by Farley Mowat. I remember glancing up from the book from time to time as the rain pelted on the window.

As I looked out at the same river where my Great Uncle Tom took American Author Zane Gray salmon fishing, I imagined what it must have been like when wolves roamed this Newfoundland landscape. Unfortunately, by the time Zane Gray visited this river, wolves were probably already gone.

I peg his visit to have been 1928 or 1929 because he was working on a book at the time, and he sent my Uncle a signed copy of “Fighting Caravans” in 1930 when he was back in California, a gift to repay a favor to him. I keep the book in a leather book jacket in a safe. For an author whose genre was Westerns, I bet the lone cry of a Newfoundland wolf might have been inspirational.

Recommended: This cell phone provider will have your hundreds of dollars a year

The Newfoundland Wolf (Canis lupus beothucus) is a mysterious animal. It was determined to be a separate subspecies by two Havard zoologists and is thought to have gone extinct sometime around 1925. Until their extinction, wolves roamed the island of Newfoundland off of Canada’s Eastern coast for 1000s of years and lived in balance with nature.

The Europeans upset this balance and brought their negative attitudes toward this animal based on ignorance, superstition, and fear. Settlers hunted wolves for sport and out of practicality to keep this ‘vicious and unpredictable” beast away from their loved ones as well as livestock.

This fear was not based on any facts. To this day, there has not been a substantiated case of a person being attacked and killed by a healthy, unprovoked wolf in North America. Like the wolves in Never Cry Wolf that the Canadian Government blamed for the carnage of dead caribou left behind by sport hunters, wolves in Newfoundland were likely the scapegoats for the dead livestock left behind by the settlers’ half-wild dogs. At the time, historians noted that packs of wild dogs were an ongoing problem for settlers.

The Last Wolf in Newfoundland

I remember, as a child, hearing that the last wolf in Newfoundland was killed in 1911 (though no specimen was found), but it seems they may have lived as long as 1925, give or take a few years. Reports of wolves, unconfirmed, continued into the 1930s. Whatever the case, there are few traces of this animal left today, with only 1 complete skin that resides in the Newfoundland Museum and 5 known skulls.

The closest I ever came as a kid to see a wolf was a taxidermied specimen in the now-defunct Animal Land tourist attraction off the Trans-Canada highway near the turnoff to Harbour Breton.

Coyotes Make the Island Home – But How?

Coyotes are new to Newfoundland. Over the last 100 years, they have migrated from the midwestern US to all over North America. The first Coyotes arrived in Newfoundland in the mid-1980s. Although newcomers, they are considered native to Newfoundland because they came to the island by their own efforts. They were first reported when “wolf-like dogs” were seen crossing the ice near the Port au Port Peninsula in the spring of 1985.

Their presence was confirmed when a pup was hit by a car near Deer Lake in 1987. By the mid-1990s, wildlife officials confirmed reports of coyotes throughout most of the Island.

It is possible that wolves could reintroduce themselves to the island in the same manner as Coyotes. It seems like this has already happened at least once.

Wolf found on the Island.

Most people agree wolves have been extinct in Newfoundland for approximately 100 years. There were sightings up until the early 1930s but were never verified. Unlike today, people back then didn’t walk around with smartphones and couldn’t snap a photo or take a video, so all they had was their word when they saw something. Many things thus went unverified.

In 2012, Joe Fleming of Bonavista posed with a photo of an animal that he killed. He initially thought it was a coyote when he shot it from a distance, but it seemed too large when he got up close. He had the animal’s DNA analyzed, and it was determined to be a wolf. Upon learning this, the hunter did express regret that he killed the animal.

The Department of Environment and Conservation hypothesized that it might have crossed on the ice from Labrador. This is exactly how Coyotes came to the island in the 80s. Whatever the case, it was considered a one-off event, but later that same year, a second sample from another animal killed in a trap three years earlier on the Baie Verte Peninsula also turned out to be a wolf.

As recently as 2019, Kurt Payne and his wife Andrea stated they saw several wolves near their home early one morning in central Newfoundland. They could not get clear images, but the couple has reportedly spent time at a wolf sanctuary in the past and felt they could distinguish between a wolf and a coyote.

Who Knows What’s Next?

Wolves roamed Newfoundland for a long time in balance with nature, yet their numbers were probably never that great, even at their peak. An unfortunate convergence of dwindling caribou herds and European hatred and fear led to this animal’s demise.

Though unverified, it does stir the imagination that just how Coyotes have made the island home so too have new wolves from the Canadian mainland. Somewhere out there in the wilderness, wolves may be slowly building up their numbers. While the Newfoundland subspecies is forever extinct, the island may once again be home to wolves.

68 thoughts on “Wolves in Newfoundland – Are they Back?”