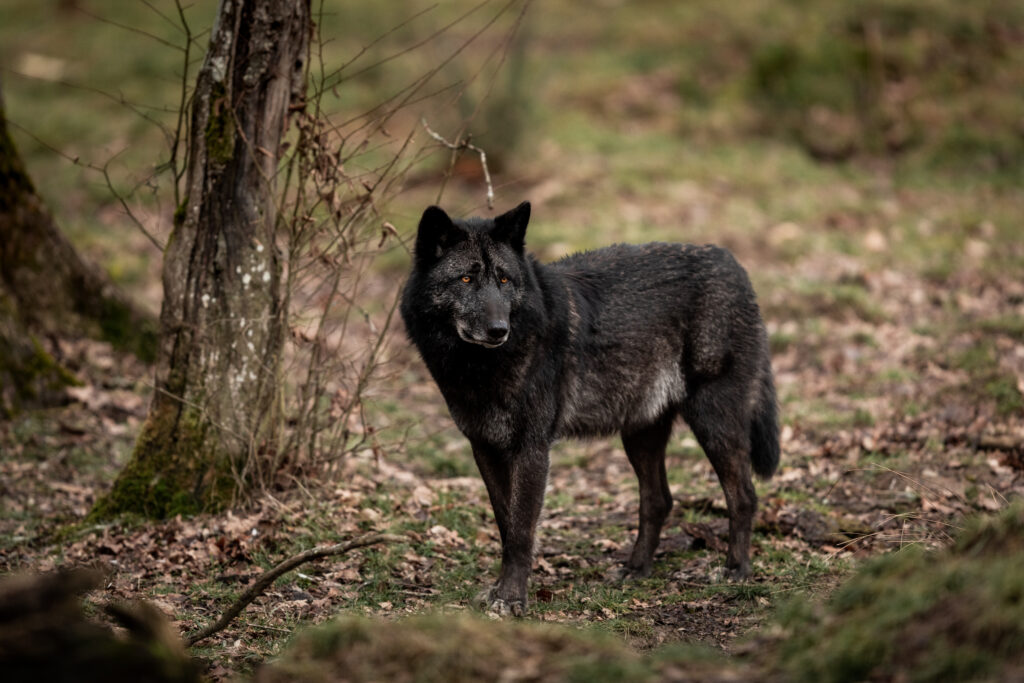 Wolves are not just hunted with guns. Traps, including wire neck snares, are perfectly legal to use in many places that allow wolf hunts. Unfortunately, these devices do not kill quickly like a bullet. They can cause a slow strangulation death if the wolf is caught around the neck. If a limb is caught, the circulation is cut off, and the limb dies while the animal waits (sometimes for days) for the trapper to return to end its suffering. It is common for unintended species and even family pets like dogs and cats to become entangled in these devices. This article discusses why wolf trapping with snares is cruel.

Trapping wolves with snares: Is it Cruel?

Yes, it is. A wolf caught in a wire snare can be slowly strangled to death as it tries to escape, and the wire loop tightens around its neck. A caught leg will have the circulation cut off, eventually causing the death of the limb. A trapper may not return to kill a wolf and end its suffering for several days. Even if more frequent checking of traps is required, enforcement is very difficult. Non-target animals, even pets like dogs and cats, are indiscriminately caught in these traps because they can be set near human habitation or highly used recreational areas on private land and public lands.

Which US States have Wolves?

In the United States, wolf populations with the highest numbers are in Alaska, Minnesota, Idaho, Montana, Wisconsin, Michigan, and Wyoming. Oregon and Washington have small, newly established populations of gray wolves, along with California. Mexican Wolves are found in small numbers in Arizona and New Mexico. The nearly extinct red wolf with numbers less than 20 is only found in North Carolina.

In Canada, wolves are found in nearly all provinces and territories except the Maritimes. There is some controversy about whether they have established a population on the island portion of Newfoundland and Labrador but are common in the mainland portion of the province (Labrador). Most wolves in Canada are gray wolves. Other wolves include the rarer eastern wolf. The Arctic wolf, known for its white fur, is a subspecies of the gray wolf.

Where are Hunting and Snaring allowed?

In the US, wolf hunting is legal in Alaska, where they have never been threatened or endangered, and in three western mountain states — Idaho, Montana, and Wyoming. Wisconsin’s wolf hunt was put on hold in 2022 after a lawsuit by conservation groups. By all accounts, that state’s wolf hunt last year quickly turned into an indiscriminate slaughter more than an actual hunt.

Wolves were first given federal protections under the Endangered Species Act on January 4th, 1974. Wolves were reintroduced to Yellowstone National Park in 1995 from Canada and flourished beyond the park’s borders. Congress delisted wolves in neighboring Montana and Idaho in 2011 and Wyoming in 2017. When his administration was in office, Trump delisted them altogether (except for New Mexico).

On February 10, 2022, protections were restored when the Trump delisting was reversed after various legal battles. Wolves were placed back on the endangered species list. They are still not protected federally in Montana, Idaho, Wyoming, or New Mexico because they were not a part of the Trump administration’s delisting — confusing, right?

While wolves are protected in national parks like Yellowstone, as soon as the animal ventures beyond the borders of that park, it is in hostile territory and can be killed. In recent years, Idaho, Wyoming, and Montana have been extremely hostile toward wolves and have ignored management strategies of wildlife biologists in favor of indiscriminate killing advocated by extreme activists. These republican-controlled states have not been receptive to science in the last few years, not just in matters of animal conservation.

GOP Gov. Greg Gianforte of Montana personally faced controversy when he killed a wolf that wandered outside Yellowstone Park that he caught in a snare. It was legal to kill this wolf, but the governor had not taken the required trapper education course. It is also questioned how he could have checked his snares as often as required since he’s a busy guy. Others speculate that someone else may have checked the snares for him and then alerted him to come and kill the animal. This is also against regulations, as a wolf found in a trap should be killed or released immediately and not held for someone else.

Note: in Canada, wolves can be hunted and trapped with a license.

What States allow snare use?

Trapping laws vary greatly from one state to the next. States that allow trapping require a permit, and you can only trap animals in season. There is no age limit to trap, but most states recommend 12 years and older, and many states also require a trapper education course. States also regulate how frequently traps must be checked. The range is from daily to 3 days. It’s anyone’s guess how states enforce this; however, in practice, it seems to be more of an honor system. Twenty-one states require a mandatory trapper education course for individual licenses.

Four main traps are used to catch animals: body grip, leg-hold trap, snare, and cage/box. The wire snare trap is popular because it is cheap and effective. It is also brutal. The wire is formed into a loop and set on or near a path with animal traffic. Baits are often used to attract the animal. When they activate the snare, a limb becomes caught, and as they struggle to get free, the wire pulls tighter, cutting off the circulation to the limb and eventually causing the limb to die. Sometimes the animal is caught around the neck and is strangled in a slow death as it tries to free itself.

Other than Hawaii, most states’ wildlife services allow some form of trapping, with most allowing all 4. The use of snares is prohibited in Colorado, Connecticut, Hawaii, Massachusetts, Oklahoma, Rhode Island, Vermont, and Washington.

A wolf is often killed instantly when struck with a bullet. That is not the case when a wolf is caught in a wire snare. An article published on the blog The Fur-Bearers provides a great example. In 2014 Paula Tough was out on a popular snowmobiling trail about 30 miles from Hunstville, Ontario, with a friend and her dog when she came across a snared wolf lying in the trail still alive. Who knows how long it had been there. The snare was set only 10 feet from the trail she was on. Had the wolf not been there, it’s possible her dog could have become trapped instead.

When she realized that the wolf was caught, she considered freeing it with wire cutters but determined the wolf whose leg flesh was torn to the bone would likely die from infection if set loose. So she went home and grabbed her son, a dog crate, heavier-duty wire cutters, and a blanket. With her son’s help, she managed to get the wolf into the crate.

She took the wolf to the Aspen Valley Wildlife Sanctuary, and while she did not know its fate, the leg likely ended up being amputated.

At the time of the incident, The Fur-Bearers suggested a sample letter people could use to write the Ontario provincial government. The group argues that the problem with traps is that they work indiscriminately. They can trap non-target species like mountain lions and domestic pets. Laws about checking traps are unenforceable. Body hold and leg hold traps are particularly brutal and should not be in use.

Conibear traps and snares should not be permitted to be used in urban areas or parks/recreation areas. Mandatory signage must be required to warn the general public about the presence of traps set close to high-traffic outdoor trails. There should also be mandatory tags that allow officials to hold trappers accountable when they do not follow the rules and check their traps at the required frequency.

Researchers at the University of Cambridge concluded in 2010 that snares do not operate humanely, either as restraining or as killing traps. They found that:

• The mortality and morbidity of animals caught in wire snares are higher than most other restraining traps, such as box traps.

• Snares do not discriminate and often catch non-target, including protected species.

• Snares can cause severe injuries, pain, suffering, and death for any trapped animal.

• In some places, animals can legally be left in snares for days, exposing them to the elements, thirst, hunger, further injury, and predator attack

• It is difficult to assess an animal’s injury severity when caught in a snare.

• If the animal escapes or is released, it may still die from injuries over the next days or weeks.

• The monitoring of correct snare use is difficult, if not impossible to do.

• Because they are cheap and require little effort to set or maintain, neck snares are open to abuse.

• The methods used to kill animals caught in snares are not regulated and may not be humane (check out this video from Canada in which the trapper simply bashes the wolf over the head with an axe and states, “he’ll expire soon, I’ll swing back and get him on the way out.”

Even if you are not a fan of wolves and think they should be hunted, it is hard to endorse the suffering these animals needlessly experience due to wire snares and other traps. Some people may argue about these trappers’ livelihoods, but as far as I can tell, there is very little market for fur outside China, Korea, or Russia. The days of the Hudson’s Bay Company fur traders are long gone.

Wolf fur is not even on the list as the most expensive fur being sought out by the market (that would be Lynx, Russian Sable, and Chinchilla). There do not seem to be many valid economic reasons to pursue this. Unfortunately, recreational trapping is the reason often cited as another reason. To me, this is simply killing the wolf in a very lazy way for entertainment (maybe turning it into a trophy).

Some will make arguments about protecting livestock or deer by killing off wolves, but research does not support those claims. In fact, in Montana, wolves play a no larger role than other predators in predator-prey relationships between elk and other deer. Other research suggests that mountain lions and black bears may play a bigger role.

The fact of the matter is that snares are inhumane devices and should not be used in managing wolves. Montanans tend to agree on this subject. In 2021 when the state proposed new changes to allow more trapping and hunting of wolves, state officials received more than 26,000 written public comments.

Montana wildlife officials had to parse the comments into ten separate PDF files. The final text was so lengthy that It would take a person several weeks to read each submitted comment. Citizens of the state expressed opposition toward hunting and trapping wolves, others were worried about the removal of an apex predator and the effect on the ecosystem, and there were specific concerns about the inhumane nature of snares.

The indiscriminate nature of snares

11 thoughts on “Is Wolf Trapping with Snares Cruel?”