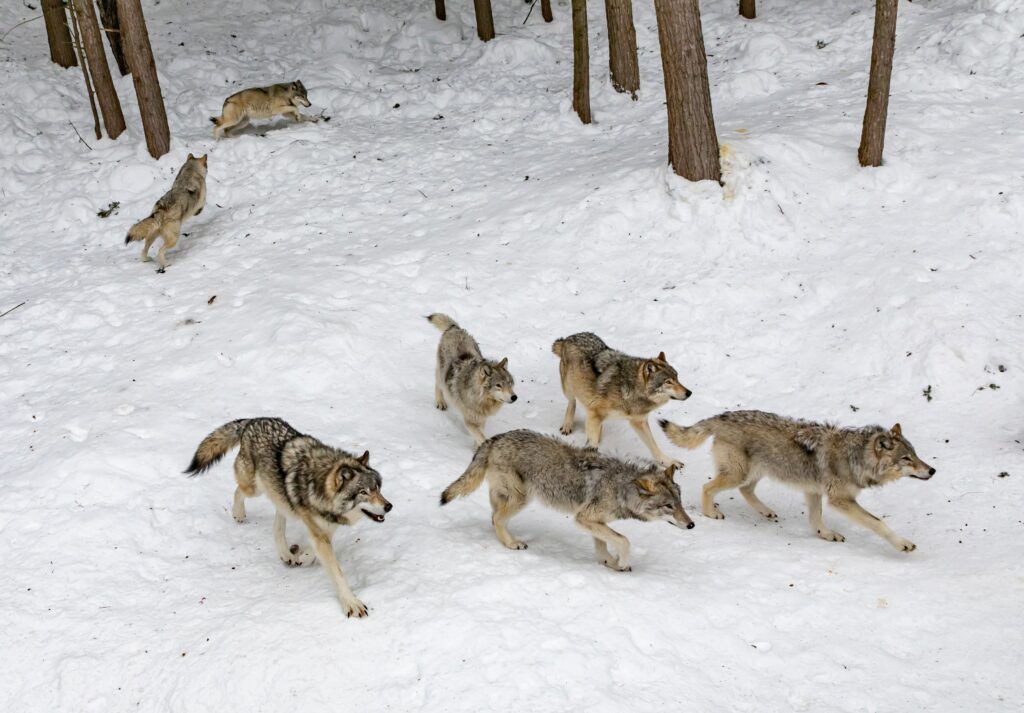 In defiance of its own board members, administrators at the Wisconsin DNR (Department of Natural Resources) have scaled back the second wolf hunt this year scheduled for November. Will the lowered quota last or will legal actions from political lobbyists force the higher quota of 300 into effect?

Another clash has occurred between the conservative-leaning board of the Department of Natural Resources and its liberal-leaning administration. Biologists in the department recommended a quota for a second hunt to be 130 wolves maximum. They were under political pressure and went with a lower number as they still don’t know how these hunts will impact the wolf population long term.

Never ones for science, the conservative board channeled their Dunning Kruger bias, ignored the recommendation, and set it at 300. They were appealing to politics and they make their case by stoking the perception that wolves are killing all the deer and causing huge livestock losses each year. It does not matter that this isn’t true. They are appealing to groups like Hunter Nation who just want to kill as many wolves in as many ways as they can imagine.

Fortunately, a treaty with the Chippewa tribes from about 200 years ago allows them the right to claim up to half of the state’s wolf quota. Out of the 130, they have claimed 56 animals. They consider wolves sacred and won’t hurt them so the net effect is that Wisconsin hunters will only be allowed to kill 74 animals.

Since the DNR under state law is supposed to follow the directives of the board, it is unclear if there will be an intervention to force the higher quota of 300 that the board set. Groups like Hunter Nation with Ted Nugent as its spokesman are probably trying to figure out how to do this before the season starts on November 6th.

This was the originally scheduled hunt. The previous hunt in February of this year was because Hunter Nation sued the state, arguing that the incoming Biden administration could add wolves back to the endangered species list at any time and therefore “rob” hunters of their wolf season. As we have seen play out, the Biden administration has taken no steps toward protecting wolves and doesn’t seem inclined to so this argument no longer holds water.

Wisconsin currently has a Democratic Governor, Tony Evers. His administration runs the department but appointees of former Republican Governor, Scott Walker are still in control of the board. The chairman, Fred Prehn is refusing to step down even though his term is expired. Governor Ever’s has nominated a replacement but the Republican-controlled Senate has done nothing to confirm the nomination. In effect Prehn is saying he won’t step down until his replacement is confirmed knowing full well his fellow red hats in the Senate will never sign off on a democratic nominee.

What’s So bad about the Hunt?

On February 22, 2021 mobs of licensed and unlicensed hunters swarmed the Wisconsin wilderness with the goal to kill any and all wolves that crossed their path. They were trying to get it all in before any attempt by the Biden Administration to place Gray Wolves back on the endangered species list. They used snowmobiles, GPS technology, traps, predator calls, and trained dogs working in 6-hour shifts to pursue the wolves to the point of exhaustion. In less than three days 99 more wolves were killed than the official set quota of 218. Wolves are not killed for food, and most hunters are not interested in the fur. The Wisconsin Wolf hunt was all about the love of killing an apex predator⸺the big bad wolf.

Other than anecdotes, data does not support that wolves have negatively impacted deer populations. The other justification comes from ranchers who say that wolves will put them out of business. To put that into perspective, in 2015 there were 112 million cattle in the US. 4.5 million died from all unwanted causes with most (3.6 million) dying from health problems, weather, and theft. About 281,000 (0.3%) deaths came from all predators not just wolves but bears, cougars, etc.

Wolves accounted for taking only 0.0009% of the US cattle inventory. The number maybe even less than this since the USDA calculates death from wolves very differently (and inflates it) than that of the US Fish and Wildlife Service.

The most primal argument is that wolves will kill humans if given a chance. To that into perspective, according to Colorado State University,  Between 1900-2000, a 100-year period, the study found only 16 cases where wild, healthy wolves bit people. In six cases, bites were severe. No bites were life-threatening.  Another 12 cases involved aggression by known or suspected rabid wolves. In North America, there are no documented accounts of humans killed by wild wolves between 1900-2000. Seems like we are worrying about something that isn’t a problem.

How you can help

If you want to do something to help an animal that is literally nature’s underdog overcome the misplaced anger and fear that humans direct toward it, then please consider supporting wildlife conservation.

You could consider a donation to the International Wolf Foundation. With your support, they aim to spread the facts about wolves and work to ensure their survival around the globe. Their mission is:

The International Wolf Center advances the survival of wolf populations by teaching about wolves, their relationship to wildlands, and the human role in their future.

Another great organization is the Defenders of Wildlife. Their mission is:

Defenders of Wildlife is dedicated to the protection of all native animals and plants in their natural communities.

Founded in 1947, Defenders of Wildlife is the premier U.S.-based national conservation organization dedicated to protecting and restoring imperiled species and their habitats in North America.