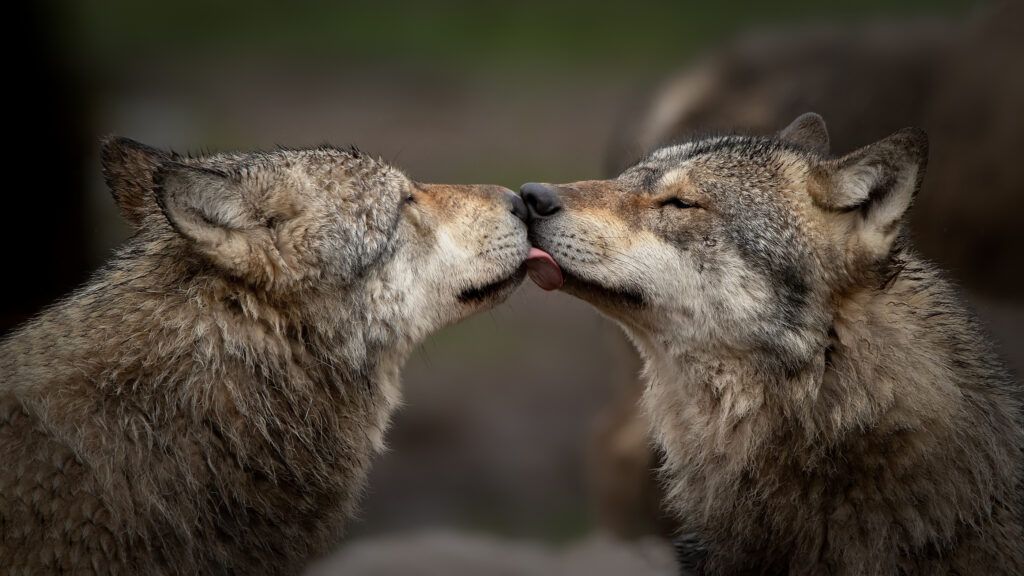 British Columbia has a problem with declining caribou herds. Loss of habitat to human activity is the primary reason. Wolves are bearing the brunt of the blame. It is easier to kill them off than take steps to protect BC’s wilderness. So, where do wolves live in BC, and what is being done to help them?

Read on to find out.

Where Do Wolves Live in BC?

Wolves live on the coast and nearby islands, mountains, central interior, sub-boreal interior, boreal plains, and northern boreal mountains. British Columbia has approximately 8500 wolves. Over 1400 have been killed in the last 6 years. The cull has been an ineffective approach to saving the Woodland Caribou, yet the province is forging ahead.

British Columbia is one of Canada’s 10 provinces. It is a large province, about 2 1/4 times the size of California. North of the Queen Charlotte Islands, the coastline becomes Alaska, and the Canadian border moves slightly inland.

Wolves in British Columbia are found on the coast and nearby mountains, Central Interior, Sub-Boreal Interior, Boreal Plains, and Northern Boreal Mountains ecoprovince.

As you can see, wolves are widely found throughout the province. They were extinct from Vancouver Island for a time but have since recolonized. They are mostly found here on the island’s northern part, north of Campbell River. They are also found along the island’s west coast down to Ucluelet.

Few live on the east coast, but they can be found in the mountains around Nanaimo, Ladysmith, and Lake Cowichan.

British Columbia is also unique because, in addition to larger Gray Wolves, it is also home to the Coastal Wolf. These smaller wolves can be found on the islands and inlets of this province with its long coastline. Interestingly, the coastal wolf derives up to 90% of its diet from marine sources.

The word ecoprovince was mentioned above. If you are wondering what that is, an ecoprovince is an area with similar landscapes, animals, plants, and climate. British Columbia has nine. While they are all connected, each has features that make it unique.

How Many Wolves are in BC, and How Many Were Just Killed?

It is estimated that there are 8500 wolves in BC. About 350 wolves on Vancouver Island. In the last 6 years, 1447 wolves have been killed, 472 in 2020 alone. The biggest reason is the province’s declining caribou herds. Killing wolves is the only solution the province is currently endorsing. It isn’t working, and there may be a better way.

Decreasing the Potential for Encounters.

Researchers hypothesized that limiting interactions between wolves and caribou would save countless caribou lives.

As I mentioned in the article “Gray Wolves Ecosystem -Unexpected benefit,” wolves prefer to travel along man-made corridors. This includes logging roads, snowmobile trails, and so on. They can move around more quickly this way.

A study was published in June of 2021 in the journal Frontier in Ecology and the Environment. It looked at a large area of land (92 square km or 35.5 square miles) near Fort Nelson, BC. The British Columbia Oil and Gas Research and Innovation Society funded the study.

Over 100 wildlife motion-sensing cameras were set up in the wilderness to track the movements of predators and prey.  The predators took advantage of human-made landscape alterations. They traveled along the forest’s gas and oil cutlines or trap lines to access the caribou herds.

Researchers downed trees to obstruct these paths. They piled up the earth in the wetlands mimicking natural hills and bulges.

The scientists banked on the fact that wolves and caribou are specific about the landscapes they prefer to use. The land was essentially made harder for wolves to travel. These changes afforded protection to the caribou by decreasing encounters with wolves.

The Argument for Killing.

Wildlife officials with the BC government questioned the study’s validity. They argued that it only proved that fewer wolves and caribou walked past the cameras, not that fewer caribou were killed.

They argued it would be expensive to alter the province’s landscape on a wide scale.

There is also the fact that paths are created by other human activities. ATV and snowmobile use would reduce the effectiveness of the barriers. So as it stands currently, the BC government will only entertain culling wolves as a solution.

In July, the environmental group, Pacific Wild, took the BC government to court. They were upset that the wildlife act was amended in January 2021. The amendment allowed wolves to be trapped with a net gun from a helicopter. The wolves are then radio-collared and released.

When the wolf rejoins its pack, it is easily found, and snipers shoot the pack members from a helicopter. This is known as the Judas Tactic.

Shooting a wolf from a helicopter is an inhumane form of euthanasia. Not every wolf shot is killed immediately, but it is left to die in the snow as the helicopter flies away. There is no public oversight of the killing operation.

British Columbia is one of only two Canadian provinces that has not adopted the Canadian Council on Animal Care standards. These standards guide the welfare and humane treatment of wild and domestic animals.

Wolves are intelligent, social animals that live as a family. The cull exposes wolves to traumatic events where they watch pack members chased to exhaustion and shot from helicopters.

It is unfortunate because killing wolves in this manner is a lazy solution. It does not address the root cause of the problem of declining caribou numbers. Researchers agree that the destruction of caribou’s habitat is the primary cause of the decline.

Despite this, British Columbia has no plans to prevent further habitat destruction or to restore what has already been destroyed.

To date, the wolf cull program has cost the province $2.2 million dollars.

Once again, wolves are the scapegoat for the activity of man. Most mammals on earth find their natural numbers. There is a supply and demand relationship between predator and prey; one keeps the other in check. Not so with humans.

The agent in the first matrix movie referred to humans as a virus and our planet as the host while interrogating Morpheus. That is a bleak summation of humanity though sometimes, it doesn’t feel too far off the mark. We watch the news and see flooding, wildfires, and huge islands of plastic floating in the ocean.

There are no limits to our exploitation of the environment to propagate ourselves at the expense of every other living thing.

By all accounts, the decline of the caribou in British Columbia is due primarily to our destruction of their habitat. Wolves kill some caribou, but we are pinning the whole thing on them to keep destroying the habitat guilt-free.

If you want to help with the plight of British Columbia’s wolves, check out Pacific Wild and consider donating. Wolves are in trouble in most places they are found. Here are other ways that you could help:

10 thoughts on “Where Do Wolves Live in BC?”