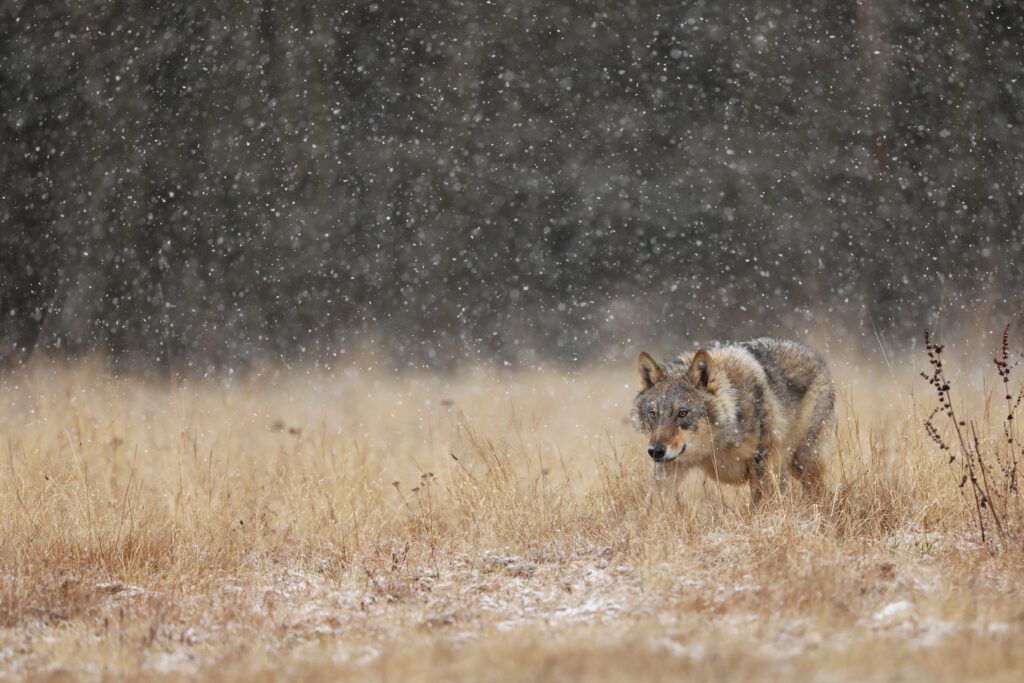 The first instinct of humans when faced with a problem is to eliminate it. If the problem is an animal, that usually means killing it. Shooting and other lethal methods of wolf control are common practice though science is starting to show this approach is ineffective. So what are nonlethal wolf control methods that work?

When it comes to protecting livestock, the simplest methods work best. They do require patience and hard work. Low-stress herding is slow and methodical but keeps the herd together which makes them less attractive to wolves. Just the presence of humans on the range discourages wolves and of course, herding the cows to keep them out of areas where you know wolves are spending time or have a den goes a long way.

When you think of wolves, you might think of Alaska or Yellowstone, or even Oregon. Perhaps because of the iconic wolves that have become famous from these regions such as Romeo (A Wolf called Romeo), Wolf 8 (The Rise of Wolf 8), or OR7 ( A Wolf Called Wander). Canada however, has more wolves than any other country–between 50,000 to 60,000. British Columbia and Alberta alone have around 15,500 wolves.

Alberta is where prime quality beef comes from in Canada. The province has part of the Rocky Mountains but most of it is prairie. It is the perfect landscape to raise cattle and other livestock. There are many opportunities for ranchers to have run-ins with wild wolves. Unfortunately for the wolves, they can be killed during hunting season and anytime on private land if they pose a threat to wildlife or livestock.

In fact, one peer review study that appeared in PLOS ONE found that Lethal interventions by the State of Michigan against wolves in the vicinities of verified livestock losses did not appear to reduce future losses. Furthermore, efforts to kill wolves on one farm may actually affect neighboring farms negatively and lead to losses there.

Of course, many people simply do not understand why you wouldn’t kill a wolf and these people often tend to not understand or trust science. Science often has a way of disproving our logic and showing us connections and effects we weren’t previously aware of. You would think that if you killed the animal that is eating your livestock then the problem would be solved. It’s this simplistic thinking that has seen these attitudes persist even though there are no real gains to speak of.

It is hard to know that you have killed the wolf that was behind the killing of the livestock. Wolves live in packs. If a member dies then the pack is disrupted. New wolves may arrive to fill the void and then there is social instability and stress. To stressed wolf pack, livestock starts to look like fast food compared to wild elk or other deer.

Wolf Benefits May Include COVID Protection?

Top predators help to keep our ecosystems healthier. Just look how the reintroduction of wolves in Yellowstone led to the flourishing of trees and other fauna around the waterways. These areas were previously ravaged by deer with no predators to worry about and there was more erosion of the riverbanks.

Wolves keep animals like deer on the move. A study in Michigan has shown a correlation between wolves and fewer deer – automobile collisions. Now with COVID-19 showing up in deer in Ohio (and no one knows why), it might be in our best interest to allow wolves to keep deer on the move, away from humans and keep their populations in check. The last thing we need is a new variant that spreads from deer back to humans.

Joe Engelhart killed his last wolf 19 years ago. That was when he decided there must be a better way. He’s been called many negative names by fellow ranchers but his methods have been successful on the 22,000-hectare ranch where he works (about 100 km from Calgary, Alberta).

In fact, his methods are being studied by University of Wisconsin Ph.D. candidate Naomi Louchouarn. She is a member of the Carnivore Coexistence Lab which studies animal-human conflicts. She is studying Engelhart’s wolf management methods to see if they have potential that can be proven scientifically.

Focusing on the behavior between predator and prey, Mr. Engelhart manages the herd in such a way as to keep them calm. When the cows are stressed they are more apt to run off away from the herd and a calf can end up separated. A lone calf is a great target for a pack of wolves but a large contained herd is not.

He also keeps track of where the wolves like to den and what areas they prefer to hang around. He makes a point to not herd the cattle to areas where the wolves are. Even the time he spends physically on the range is a deterrent (wolves prefer to avoid humans). Unfortunately, these methods are labor-intensive which is why they have not caught on yet—it’s easier to pull a trigger.

Blamed for Kills – but is it All Wolves?

The Alberta conservation association will pay ranchers a minimum of $400 if a livestock kill was verified to be from a wolf. They look for signs on the carcass like bite marks or bone bruising. Missing livestock however is not always found. The ranges can be huge and sprawling with varying landscapes to traverse. To complicate things, wolves will eat just about all of an animal it kills and there is often not many remains left to find.

There may also be theft of livestock or kills from other predators like mountain lions or bears that are also getting attributed to wolves. Some other livestock may simply die naturally and their carcasses aren’t discovered or are eaten by predators and scavengers after the fact.

The state of Wisconsin was sued last year by Hunter Nation whose spokesman is Ted Nugent (his job is to convince you that a wolf may be lurking on your kid’s playground waiting to snatch them at recess). The result of the lawsuit was a rushed hunt that led to the overkill of wolves by many brutal means by those with and without a license. Luckily conservation groups sued to prevent the second slaughter that was scheduled for November 2021.

Naomi Louchouarn from the University of Wisconsin – Madison is studying Joe’s methods and will take them back to her state where hopefully her research will convince more people there and around the world that there are more effective means to control wolves than simply bullets. It should be noted that during the study period from July to October 2020, no livestock was lost due to wolves.

You can Listen to the PodCast (CBC’s Quirks and Quarks) that told the story of Joe Englehart Here.

How you Can Help Wolves