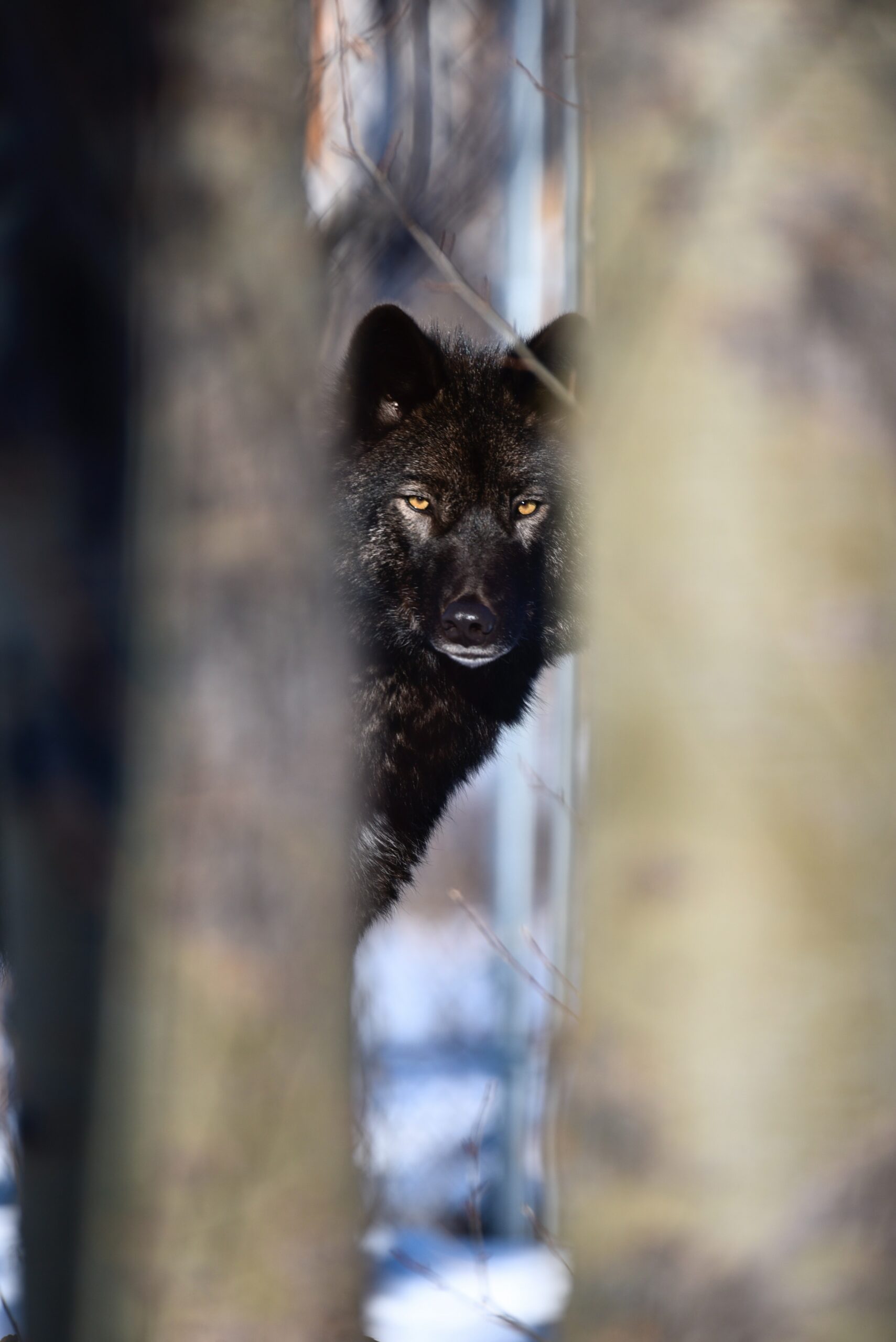 Wolves are extraordinary; man’s best friend is descended from this animal. No one is quite sure how this happened. The narrative that man tamed wolves makes for a great story but recent research points to submissive wolves largely domesticating themselves and humans taking over once the ball got rolling so to speak. Wolves are shy and people are extremely unlikely to encounter a wolf in the wild unless they take a trip to the Lamar Valley in Yellowstone National Park. This is what makes the story of the wolf called Romeo so unique. An encounter that would have been rare if it lasted for just a minute or two ended up lasting 6 years. Read on to find out about the Romeo wolf that won over the hearts of a suburb of Juneau, Alaska.

Recommended: This cell phone provider will have your hundreds of dollars a year

Nick Jans used to be a hunter but he turned wildlife photographer after his life was changed by a very special animal⸺a large black wolf the town came to know as Romeo. It all started one day when he spotted some tracks in the snow that looked to be of a wolf. A few days later he spotted the wolf on the ice. Nick threw on his skis and went to investigate.

He found the wolf and the odd thing was that the animal was relaxed and tolerant. This wasn’t a pet that had escaped or some hybrid wolf, it was a pure wild wolf that seemed to want a connection. The wolf quickly befriended Nick’s dog Dakotah and even started playing with it. This encounter was the first and it definitely wasn’t the last. Because the canid romance seemed to be about as likely to work out as that of a Montague and a Capulet, the wolf earned the nickname of “Romeo.”

For want of a better word, the only thing I can say from a human perspective is that it amounted to friendship. If you wanted to be scientifically correct, it would be “social mutual tolerance.” But it was more than that. The wolf would come trotting over to say “hi”, and give a little bow and a relaxed yawn, and go trotting after us when we went skiing. There was no survival benefit. He obviously just enjoyed our company.

Wolves rarely accept strangers. A wolf will even attack a brother, sister, or parent if circumstances led that wolf to join a rival pack. The pack comes before all else. A yellow lab like Nick Jan’s “Dakotah” would be a strange canid-like creature to a wolf. A dog like this would stand a good chance of being attacked by a wild wolf after a surprise encounter⸺not so in this case.

After the first encounter, Romeo would return, curl up out on the lake ice and wait for Dakotah to come out. The local paper started to report on these encounters and interest in the town grew. Some did express hostility toward the wolf making comments like “the only good wolf is a dead wolf,” but to others, it was viewed as a spiritual creature that is beyond our understanding. Most didn’t care one way or the other as long as it kept its distance.

More townsfolk became fascinated by Romeo and would go to the lake to see the wolf. Incredibly the wolf would play with their dogs as well. Strangers could not typically get within 100 yards of the animal but if a person was familiar and he knew that person’s dog, he would let them within touching distance.

Nick said that he often was so close he could have reached out and brushed Romeo’s back but he never did. This was not some pet after all; this was a wild wolf that was successful in hunting and feeding itself. It didn’t need handouts from humans.

Even a wolf raised by humans remains a wolf and will never be transformed into a dog. A pet wolf will simply never have the motivation to please its owner that a dog has; its spirit will always be wild and on its own terms. Romeo was very intelligent and social and seemed to simply want to play with the other dogs for the sake of play itself. One of Nick’s friends, Harry Robinson, became close to Romeo. The wolf would bring out some toys like styrofoam floats that he had stashed and bring them to Harry to throw for him.

Inspiration to Write the Book

Nick says that the three species, dog, wolf, and man interacting together in harmony was the single most transformative event in his life. To this day he still wakes up at night and thinks of Romeo and there are certain passages in his book he cannot read out loud without becoming emotional.

Romeo’s relationship with the town lasted a full 6 years before he abruptly stopped coming around.

Park Myers moved to Juneau about 5 years prior to the killing of Romeo. His friend from out of state, Jeffrey Peacock, was with him the day Romeo was killed. They also killed a couple of black bears around the same time.

These two showed disrespect for wildlife by not following the hunting rules. They were charged with taking big game by unlawful methods, baiting bears without a permit, and three counts of unlawful possession of game. While the hunting season for wolves was open at the time, they shot Romeo with a .22 caliber rifle. The law requires a higher caliber. Smaller calibers are less effective and may cause the wolf to needlessly suffer before dying.

It seems when Myers realized that he had shot the town’s beloved wolf, Peacock who lived in Pennsylvania offered to say he was the one that pulled the trigger because they knew how the town would react⸺Myers still had to live there. Myers also tried to change his story and say that the wolf was not Romeo. The resulting investigation verified it was.

Ultimately the case went to trial and Myers, who had filed for bankruptcy, fired his lawyer and represented himself. He was given a suspended sentence and ordered to pay several thousand in fines and restitution and lost his hunting privileges for 3 years. Peacock also received a suspended sentence and had to pay smaller amounts in fines and restitution.

How the Town Coped

The wolf that trusted man ultimately paid the price. Humans have a great capacity for kindness and cruelty. The town was devastated by the loss of Romeo and a memorial service was held in November of 2010 with a plaque that dedicated the special friendship the wolf had with the town. Romeo didn’t deserve the way his life ended after so many years of trusting people and playing with their dogs.

Final Thoughts on the Romeo Wolf

Unfortunately, the current climate toward wolves is even worse than it was back in 2010. Wisconsin is hosted what can be described as a senseless slaughter in early 2021 and is vying to do it again before the year is over. Ted Nugent has been hired by Hunter Nation to use his loud and usually misinformed voice to promote these slaughters.

Other states like Idaho and Montana are trying to eradicate wolves by any means necessary. Other states are considering doing the same.

What can you do to Help?

If you are disturbed by the situation in Montana, Idaho, Wisconsin, and elsewhere in America and Canada:

Takaya was another lone wolf similar to Romeo. He somehow navigated the metropolitan area of Victoria, British Columbia undetected and swam 2.3 miles in the cold pacific ocean to take up residence on tiny Discovery Island. Despite no game to hunt or freshwater, he lived there for 6 years against all odds. His life was documented by island resident, Cheryl Alexander until he abruptly left in 2020. Unfortunately, Takaya faced the same fate as Romeo. Read more about it here.

9 thoughts on “The Story of the Romeo Wolf”