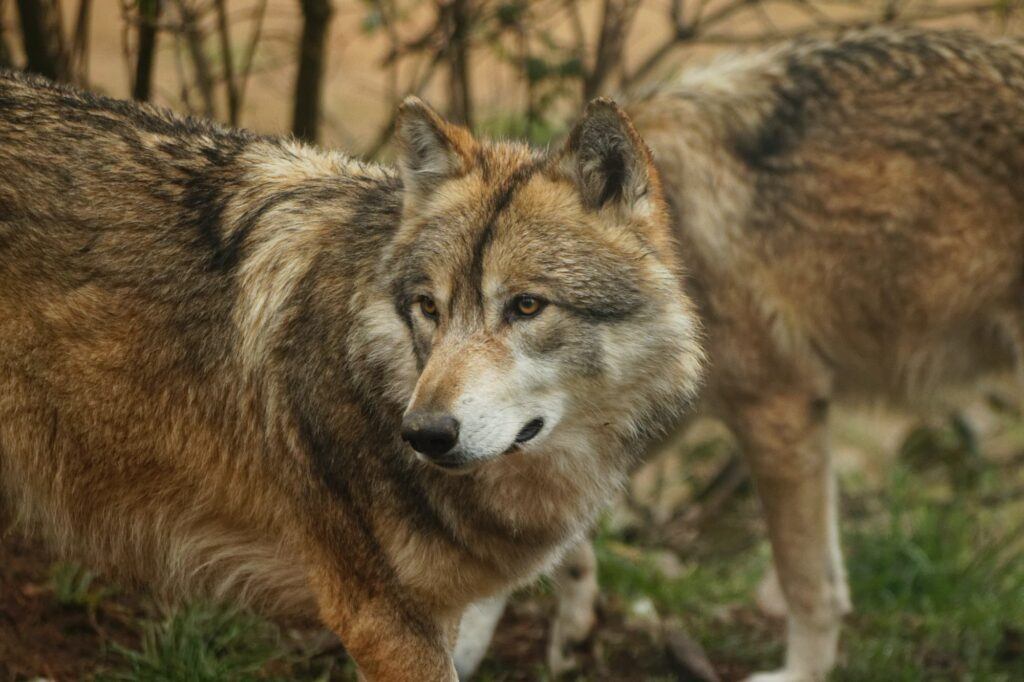 The Red Wolf or Canus rufus is critically endangered and the population is decreasing. There are fewer than 35 of these wolves left in the wild—perhaps closer to 10. As recently as the early 2000s, they seemed to be on the road to recovery, but the gains made were quickly lost due to human activity such as illegal hunting. Poaching is nothing new for wolves, so why are Red Wolves so Endangered, and what can be done to alter their path to extinction?

The Red Wolf has a reddish cast to its brown fur with some black on its back. The red is more prominent around their ears, head, and legs. They are in between the size of a coyote and gray wolf and weigh 45-80 pounds. Their heads are wide, muzzles broad, ears pointed, legs slender, and feet large. They are about 26 inches at the shoulder and 4 feet long from nose to tail. By comparison, a male gray wolf can weigh as much as 180 pounds with a length of 5.2 feet.

The Red Wolf is truly American. Its entire historical range has been within the United States from South Texas all the way up to New York and east to central Pennsylvania. Unfortunately, today, it has lost 97.3% of its habitat which has put it directly in the path of humans. This has contributed to its status as critically endangered. The only place left in the wild where they can be found is the Alligator River National Wildlife Refuge located in eastern North Carolina and the surrounding counties.

Why are they so Endangered?

Like other wolves, Red Wolves were hunted and persecuted relentlessly in the 19th and early 20th centuries. By the 1960s, only a small population remained in Louisiana and Texas. By 1980, the Red Wolf was considered extinct in the wild. A successful breeding program started at the Point Defiance Zoo and Aquarium in Washington state between 1974 and 1980. Starting with just 14 animals, the program’s success led to the reintroduction of Red Wolves into the wild and by 2006, their population in North Carolina had peaked to around 130.

By 2018, this population had decreased to an estimated 25-35 wolves. In an act that seemed to be designed to assure their extinction, the Fish and Wildlife Service in North Carolina proposed shrinking the recovery area by 90% and allowing landowners to shoot Red Wolves if they strayed onto their property—luckily the courts struck this absurdity down. Even though it remains illegal to kill them, gunshot wounds remain the leading cause of death. The Defenders of Wildlife paints an even more dismal picture in 2021:

As of February 2021, 10 known (radio-collared) red wolves roam the wilds of northeastern North Carolina, and about 250        comprise the captive breeding program, still an essential element of red wolf recovery. Although the red wolf population peaked at over 130 individuals in 2006, inaction and mismanagement on the part of the USFWS, coupled with illegal killings, has resulted in a steep decline. No wild litters were born in 2019 or 2020.

What is being done?

At the end of February 2021, 33 members of Congress sent a letter to the US Fish and Wildlife Service (FWS) urging them to immediately implement a plan to prevent the extinction of this animal—the most endangered wolf species in the world.

“The American red wolf is in peril, and the continued decline of this critically endangered species must be addressed with the urgency this extinction crisis demands,” said Congressman Donald McEachin. “For six years, the Fish and Wildlife Service has failed to release any captive red wolves into the wild population, and no wild pairs of red wolves have reproduced during the past two breeding seasons. The continued failure of the agency to resume its previously proven successful conservation measures has violated not only public trust but also the Endangered Species Act. With only ten known red wolves left in the wild population, I urge the Fish and Wildlife Service to immediately resume the release of captive red wolves into the wild. The American red wolf is a critically important species, and we must ensure its preservation and conservation.”

Some recommendations include: introducing breeding pairs, restarting the sterilization program for coyotes, and protecting them from poachers.

It remains to be seen if the congressional letter will affect the policies and plans of the FWS. One can only hope. If not, then the situation of the Red Wolf is beyond dire.

The Red Wolf is so endangered because, like all wolves, they have more enemies in humankind than friends. As wildlife groups desperately try to save them and bring them back from the brink of extinction a second time, others want to kill them over some imagined threat or perhaps simply because they enjoy killing endangered animals. Government inaction and indifference are certainly not helping. If the Red Wolf disappears from the planet, it is yet another example in a very long list of how we, the supposed stewards of this planet, have failed once again—cutting off our noses to spite our face—living under the illusion that we are somehow separate and immune to the damage we do to the only home we know.

If you would like to help, check out the Defenders of Wildlife or the National Wildlife Federation.

Other Articles to check out:

1 thought on “Why Are Red Wolves Endangered?”