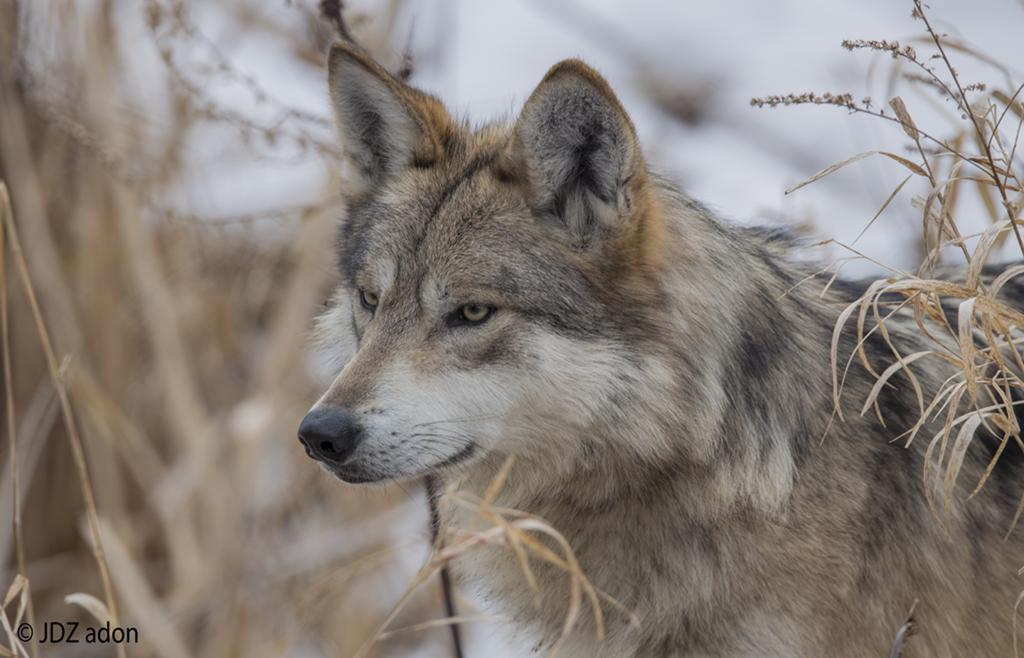 Known as El Lobo, Spanish for “the wolf,” they once numbered in the 1000s. By the 1970s, they were gone from the wild, existing only in captivity––a similar story to that of the Red Wolf. In 1998 eleven wolves were released into the wilderness in Arizona. Their numbers have been growing slowly, but they are still very much in trouble as a species. Please read further to find out some interesting facts about the Mexican Gray Wolf as well as how you can help.

How El Lobo Compares with the Gray Wolf

The Mexican gray wolf (Canis lupus baileyi) is the smallest, southernmost occurring, rarest, and most genetically distinct subspecies of the gray wolf in North America. This species of Wolf weighs only 50-80 pounds, 5.5 feet from nose to tail tip, and stands 28 to 32 inches at the shoulder. Mexican Wolves live up to 15 years in captivity––much like a medium-sized dog. As a point of reference, a male gray wolf can weigh as much as 180 pounds with a length of 5.2 feet and stand 31-33 inches at the shoulder and live up to 7 years in captivity. Both wolves only live 6-8 years in the wild and both rarely breed with coyotes, unlike some other wolves.

Another interesting fact about the Mexican Wolf is that they are considered a distinct evolutionary lineage of the gray wolf. It’s latin species name is Canis lupus baileyi. Their coats are full of rich colors of buff, gray, rust and black––often with a recognizable “face mask.” Unlike the gray wolf (seen here) there are no all white or all black varieties.

The social structure is complicated and the communication system elaborate including: scent marking; body posturing; vocalizations such as howling, barking, whining and growling.  The packs consist of an adult mated pair and their offspring. Their diet ranges from animals as big as elk to as small as rabbits and mice.

As you may have guessed by the name, the Mexican Gray wolf was once found from central Mexico throughout the southwestern U.S., including Utah, Colorado, and Texas. They prefer forests in the mountains, grass, and shrublands. Work is underway to reintroduce them to Mexico. In 2019 from those 11 original wolves, 163 individuals were making up 42 packs near the central Arizona/New Mexico border (see current range) A pack can be as few as just 2 animals! The lastest field notes from the recovery effort by Defenders of Wildlife counted 186 animals meaning the population continues positively.

Why is the Mexican Wolf so Endangered?

The early part of the 20th century was not kind to the Mexican Gray Wolf. Their population took a hit from trapping, poison baits, and guns until the last wild wolves were killed in Texas in the 1970, with Arizona and New Mexico following closely behind. A small number of Mexican wolves existed in captivity and were successfully bred. It was 28 years later before individuals were released back into the wild. As previously mentioned, this program has been a success and the population has seen a slow but steady growth. Once again the U.S. Fish and Wildlife Service (FWS) seems to be pardoxically working against this success.

Because of pressure from the states of Arizona and New Mexico, FWS has not released well-bonded family groups of wolves with their pups in many years, putting the long-term health of the wild population at risk. The Mexican Wolf Species Survival Plan houses suitable family groups that could be released to provide an immediate boost to breeding pairs and to improve the wild gene pool.

What Is Being Done?

For years, scientists have recommended to FWS that there be three subpopulations of at least 200 wolves each (and 750 total), spread throughout the Southwest. This metapopulation structure and geographic distribution is imperative to the success of Mexican wolves, but raw politics have prevented this important change.

Withouth intervention and new wolves added, all it takes is a few bad polices and this growing populaiton could suffer the same outcome as the Red Wolf in North Carolina. The Red Wolf too was brought back from the brink of extinction and saw a increase in the wild population to 150 animals; yet through bad policies and FWS inaction has again dropped to just 10 known wolves in the wild.

You can send your comments to the FWS to encourage them to once again add new wolves from the SSP to diversify the gene pool in the wild and boost the numbers. You can also support groups like Defenders of Wildlife who are working tirelessly to ensure the survival of Mexican Wolf.