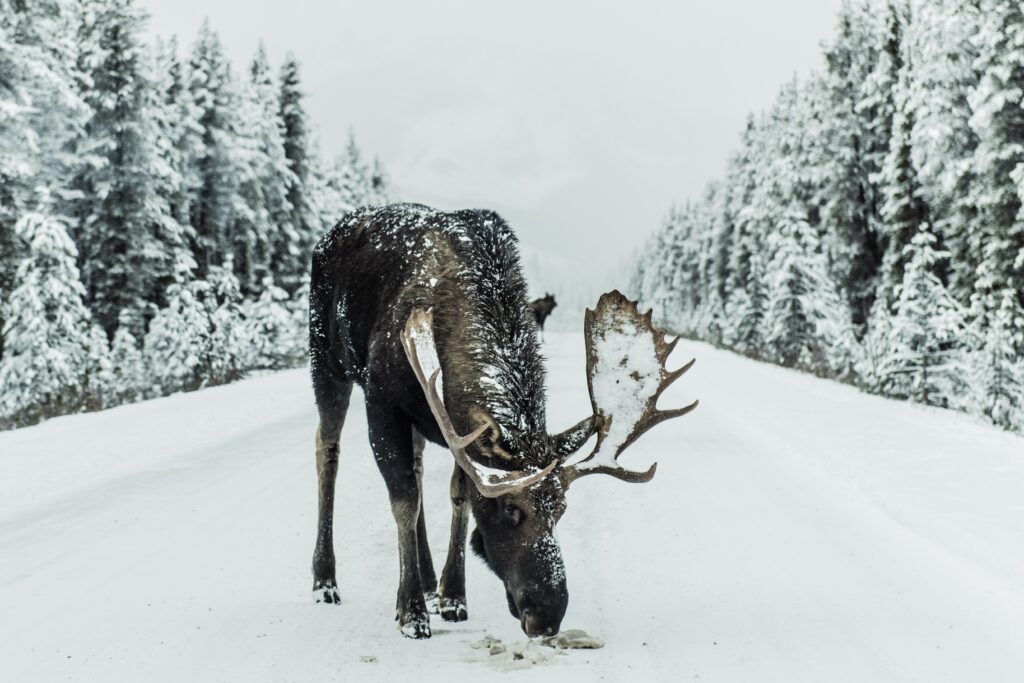 Sometimes when an Apex predator is re-established in an area, there is an unintended positive consequence. A recent study found one such consequence when Gray Wolves moved back into the American wilderness around The Great Lakes. Read on to find out more about how the Gray Wolves’ ecosystem⸺with them on top of the food chain⸺can have an unexpected human benefit.

Deer and Automobiles – My Experience with Moose in Newfoundland.

In places where deer are plentiful, collisions with automobiles are a fact of life: I speak from experience.

I grew up on the island of Newfoundland. Caribou are native to the island: moose are not. When I was a kid, anytime we took a road trip (usually to Harbour Breton), my Dad always drilled into us to keep an eye out for moose: “2 sets of eyes are better than one,” he’d say. Later when driving across the island as an adult (both when I lived there and when I came back to visit), I had my own close encounters. Moose will pop out of the brush that’s growing too close to the road⸺it’s definitely not the good kind of adrenaline rush.

Who Introduced Moose and Why?

In 1904 near Howley, 4 moose from Canada (Newfoundland was a part of Britain and didn’t join Canada until 1949) were shipped to the island by boat and then to central Newfoundland by train. They were introduced as part of a broader government initiative to develop the island’s interior. Government officials hoped that moose would attract big game hunters who could reach the interior via the railroad. The meat would also help to sustain workers in the developing mining and forestry industries. Moose with a lifespan of about 12 years were very successful at reproducing. With no real predators to keep these deer in check (wolves were already on the way out at the time, and Coyotes didn’t appear on the island until the 1980s), it is estimated that 150,000 moose have descended from these original four.

As roads were built across the island and later paved, vehicles could travel at faster speeds, and collisions with these large animals became commonplace. It doesn’t help that most highways go through prime moose habitat. For a province with only half a million people, there are 500-600 moose-vehicle crashes each year on average with 5-10 serious injuries and 1 death.

A recent study at the University of Wisconsin, based on 22 years’ worth of data, found vehicle collisions go down about 24% when wolves enter an area. This equates to savings by the state of $10.9 million each year. This figure is 63 times greater than the money paid out as compensation for the loss of pets or livestock. Some of this reduction is due to predation, but most of it is hypothesized to be due to deer living in a state of fear. Wolves like to use roadways and other artificial corridors to move quickly through a territory—deer recognize this pattern and then avoid these areas.

There have been many studies about the negative impact of wolves on livestock, but not many about the positive ways they impact the ecosystem. In 2008, a study for the U.S. Department of Transportation estimated deer-vehicle collisions cost more than $8 billion annually. These crashes can lead to serious injuries, high medical expenses, or even loss of human life. There is an average of 19,757 collisions with deer in Wisconsin annually, with 477 injuries and 8 deaths. There would be more than this if the wolves were not around. Wolves are a cost-effective solution naturally working to mitigate this problem 24 hours a day, 7 days a week. One interesting side note is that vehicles rarely hit the wolves themselves.

Some people might argue for alternate methods such as more hazard signs about deer, but studies have shown these are not that effective⸺people ignore signs. Another idea is an overpass for deer, but these are expensive to build and so they only end up being built over high collision hotspots. Wolves as a solution come out on top in terms of both cost and effectiveness.

Interestingly, it’s not just wolves that add benefit A 2016 study found that cougars decreased the number of deer-vehicle crashes in parts of the eastern U.S. by about 22%.

Moose are five times heavier and more aggressive than deer, and their actions are much harder to predict. Deer, once moving, are likely to continue running in the same direction, but moose are likely to change direction one or more times, doubling back on their tracks and remaining in the road for long periods.

Moose tend to be most active at dawn and dusk but will wander onto roads at any time of day. It’s hard to spot them at night because of their dark fur. You can honk your horn and make noise, but I would recommend just stopping or driving really slow until it moves off the road and you are past it. Once I flew into St. John’s from San Francisco and then drove 10 hours across the island from my sister’s house to my Mom’s, only to encounter a very stubborn moose trotting on the road just 30 minutes from her house. It was in the middle of the road and it was a very foggy night. It was randomly changing direction, going off the road, and then coming back on. I would sometimes lose it in the thick fog. I was so tired and frustrated that I tossed out an apple in hopes it might want to eat it and veer away from the yellow line. I was stuck following behind it for at least 15 minutes before it ran off the road and into the brush.

Deer on a whole are a little easier to deal with. If you see one, there is likely more as they travel in herds so you know to keep your guard up. They move more predictably than moose. Either way, if you see signs warning about deer or moose, drive slow, drive during the day if you can, keep scanning the sides of the road, and make sure your passenger doesn’t decide to take a nap because 2 sets of eyes really are better than one.

The relationship between wolves and the ecosystem is complex with costs and benefits. It appears based on this research that there are benefits not previously considered that may outweigh the costs of an occasional livestock kill. A healthy population of wolves in an area is a low cost solution to reduce the number of deer-vehicle collisions.

Things to do in Newfoundland