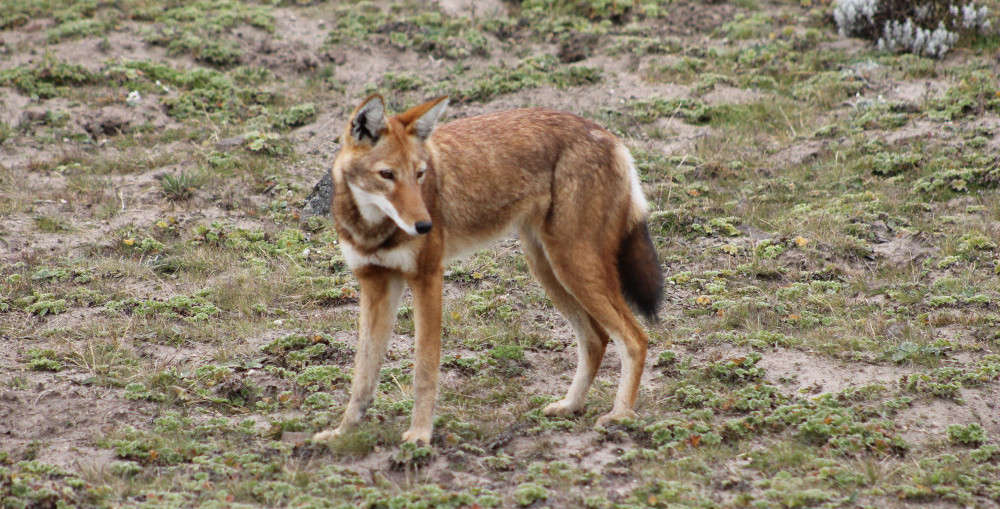 The Ethiopian Wolf (Canus simenis) is only found in the highlands of Ethiopia. It is one of the world’s rarest Canids. It’s a close relative to the grey wolves and coyotes that colonized the Horn of Africa through land bridges. Continue reading for more Ethiopian Wolf Facts and what challenges they face.

This little wolf is about 3 to 3.3 feet long, 21-24 inches tall, and weighs 25-31 lbs. The appearance of the Ethiopian Wolf is reminiscent of a big fox with its narrow muzzle, small teeth, reddish coat, and bushy tail⸺in fact, another name for this wolf is the Simien Fox. Despite the resemblance, this canid is considered to be of the genus Canis and a relative of the Grey Wolf.

The packs are close-knit with up to 18 individuals. Unlike some other breeds of wolves, the males rarely leave their birth pack but females will sometimes leave in order to mate with members of another pack. The dominant female breeds once a year with the dominant male from the pack or sometimes a male from a neighboring pack. This behavior prevents interbreeding. Pregnancy lasts only 2 months and a litter ranges in 2-7 pups.

Packs typically include extended family members male and female. All pack members help with raising and protecting pups. Wolf mothers give birth in dens dug under boulders, inside crevices, or in other protected spots. These dens can have multiple entrances and a network of tunnels, and the adults regularly shift pups from one den to another.

The Ethiopian Wolf is a meat-eater. It is usually a loner when hunting but not always. It preys on rodents like the common grass rat, small hares, and the Giant Mole Rat.  They also eat eggs, goslings, and young hoofed animals and they will occasionally scavenge on carcasses. Ethiopian Wolves catch their prey in shallow holes where their small muzzles prove advantageous

Interestingly they can sometimes be found foraging in the middle of a herd of Gelada Monkeys (Bleeding Heart Monkeys). Surprisingly they don’t prey on young Gelada Monkey’s and the Gelada’s don’t flee from these wolves as they do from feral dogs. Researchers have also noted that wolves catch twice as many rodents when hunting in a Gelada group⸺so maybe they have learned it is beneficial not to scare them away.

The biggest threats are due to human activity directly or indirectly: agriculture activity, livestock overgrazing, exposure to lethal diseases found in domesticated dogs like canine distemper, hunting, and interbreeding with dogs. New roads built across the land where the wolves are found have increased access to these animals by hunters as well as increased the chance of them being killed by automobiles.

Rabies is also a major problem for these wolves. Unlike in North America where most dogs are vaccinated and are not feral, these wolves exist in the highlands of Ethiopia essentially like islands in a sea of dogs.

Dogs often carry rabies which is easily passed on to the nearby wolves. In addition, the tendency of the wolves to sometimes mate outside their normal pack also serves to spread the virus. There have been vaccination efforts for both the dogs and wolves by conservation groups in the region but the threat still remains.

What can you do

The Ethiopian Wolf is the only type native to Africa and it is estimated there are only 300-400 left. The African Wildlife Foundation (AWF) could use your donations. AWF supports the Ethiopian Wolf Conservation Programme, which administers rabies and distemper vaccines to wolves and also to the area’s domestic dogs, who can carry rabies and pose a significant disease threat if not vaccinated. To date, the program has vaccinated tens of thousands of dogs.

Final Thoughts on the Ethiopian Wolf

The Ethiopian Wolf is one of the 3 major species of wolf (the other 2 are the Grey Wolf and Red Wolf). It is the only wolf native to Africa and is only found in the mountains of Ethiopia. Like its counterparts, it too has been a victim of human activity. If it continues on its current track, it very likely this animal will become extinct. On top of all of the challenges faced by this wolf, internal conflict has recently become a problem. Ethiopia itself is now essentially in a war with the people in its own Tigray region. This is not far from the Simien Mountains (it’s much further to the Bale Mountains); it does deprioritize any efforts the government might put toward conservation.

Even more concerning are the accusations that Ethiopian and Eritrean allied forces who are working together have raped 100s of women in the region in an effort of suppression. If the Ethiopian Government is condoning this atrocity on its own citizens, wolves stand little chance of compassion or hope for help. Amnesty International writes that the UN estimates 2.3 million people in the region are in immediate need of life-saving assistance. Government authorities have impeded access by humanitarian agencies. You can call on Ethiopia to immediately allow full humanitarian access to Tigray and perhaps bring some stability back to the region.