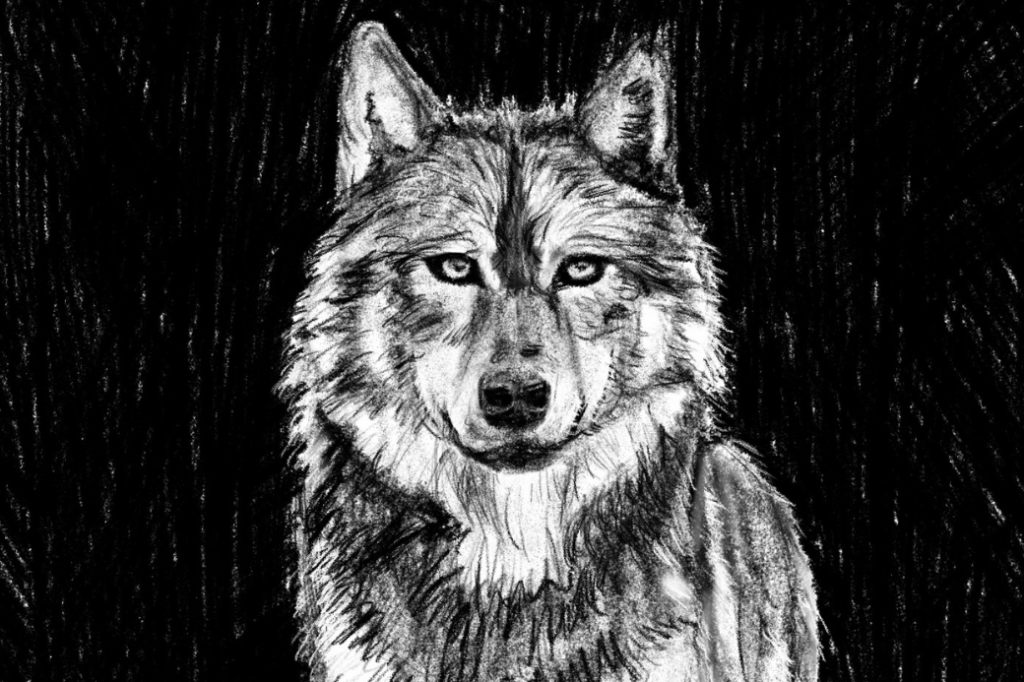 In March of 2020, a wolf with a history of non-aggression towards dogs was killed in a remote area of British Columbia’s Vancouver Island. Amazingly, this wolf, known as Takaya, had spent nearly 6 years as the only wolf on a small island just off the coast of the city of Victoria, British Columbia.

No one knows why he made the island home or why he abruptly left but his presence was well documented by visitors to the area and through many close encounters with the only resident of the island, Cheryl Alexander.

She subsequently made a documentary with the video footage she collected. Encounters like the ones Alexander captured as well as those described by Nick Jans in his book, A Wolf Called Romeo beg the question “can a wild wolf and a dog be friends?” Read on to find out more.

Can a Wild Wolf and a Dog be Friends?

Yes. There have been many recorded incidents of wolves interacting without aggression and sometimes even playing with domesticated dogs that they encounter in nature. Wolves, especially when in a pack are known to be aggressive and even kill other wolves, coyotes, foxes, and dogs that they come across in their territory as they view these canids to be a threat. It seems that when a wolf is alone with no pack and no territory, there is potential for socialization with dogs.

Takaya was a lone wolf that lived on the tiny Discovery Island located off the coast of Vancouver Island, British Columbia, near Oak Bay (a suburb of Victoria). In 2012, The wolf somehow managed to navigate through the Victoria metro area and swim the 2.3 miles (3.7 km) to the island where he took up residence. He was the only wolf on the island.

There were no game animals or fresh water and many believed the wolf would not survive⸺but survive he did for 6 years. Unlike other areas in BC, you would not expect to find a wolf here.

The island is mostly uninhabited and is only about one mile (1.6 km) long and a half-mile (0.8 km) wide. A large portion of it forms Discovery Island Marine Provincial Park. There is an unmanned lighthouse and most of the land outside the provincial park is a part of the Songhees Nation Indian reservation. The only private land on the island is owned by Cheryl Alexander and her husband.

Alexander describes herself as an environmentalist and her proximity to Takaya allowed her to capture thousands of hours of video footage during his time there which she turned into a documentary (Takaya: Lone Wolf) and a book. The documentary has won awards and has been shown around the world.

“I hope that this book will help create a better and more informed relationship between humans and wolves.”

In the Victoria region, Takaya became well known. Boaters, hikers, kayakers, and photographers could often catch a glimpse of the wolf when he chose to be seen. His presence created a mystery and many unanswered questions. Why did he choose to take up residence there? What happened to his pack? Was he hoping to find another pack on the island ( that, unfortunately, didn’t exist)? Why did he stay there as a lone wolf for so many years?

Worried about habituation, conservation officers urged people to stay away from the wolf but of course, people didn’t. Similar to the situation with the famous Alaskan wolf Romeo who appeared on the frozen MENDEHAL lake each winter to play with people’s dogs, curious humans could not stay away.

Takaya must have begun to view humans as harmless during his time there. It was reported by a man who used to patrol the area on behalf of the Sohee nation that the wolf would often come to within 20 feet of him and just hang out.

He may have survived so long due to the lack of competition. A lone wolf that runs afoul of an established wolf pack in their territory is often killed. While there were no game animals to hunt he seemed to do well feeding off of marine animals such as harbor seals. Wolves on the coast of British Columbia in fact, depend heavily on marine life for food as opposed to deer.

For some reason, in 2020 after several years on the island, the wolf swam back to Vancouver Island and was spotted in the neighborhoods just a short distance from the British Columbia parliament building. Maybe Takaya had a desire to be around other wolves that he could no longer ignore. Conservation officers found, tranquilized, and tagged him. He was then transported to an isolated area near the community of Port Renfrew.

Could a Takaya, a Wild Wolf, and a Dog be Friends?

Despite the typical aggression usually displayed towards other canids like domestic dogs, Takaya much like, Romeo in Alaska was curious instead. There were reports in 2012 on a nearby island and again in 2016 that Takaya had interactions with dogs that were all positive.

After he had been relocated near Port Renfrew, he could often be spotted along the logging roads which locals often used to walk and exercise their dogs on off-leash. Takaya had more interactions with dogs during this time without incident. In fact, one local describes a time he was walking and looked back to see a wolf with a yellow tag touching noses with his dog, like what you would see at the dog park

Eventually, Takaya traveled 50km (31 miles) from where he was released to an area of private forest lands near Shawnigan Lake. This is a recreational area with a residential community around the lake. It was here that Takaya’s story ended. In March of 2020, the wolf was killed by a hunter traveling on a logging road looking for a friend’s missing dog.

His own dog had an encounter with Takaya. As the wolf approached the dog as he had with so many other dogs before, the hunter called his dog back to the truck. He expected the wolf to run off and when it didn’t he decided to take a shot at it since it was open season. His bullet tore through the now 11-year-old wolf (quite old for a wild wolf) and it fell dead.

As we already know by this point, Takaya was one tough wolf as the autopsy later revealed 10 broken ribs that happened earlier possibly from a vehicle collision. The fact that this wolf was still alive and fending for itself with this painful injury.

On the day he died, the wolf approached the dog and the hunter expecting no harm like every other time but was ended by the same species that he had only experienced curiosity and awe from before.

While the hunter did not break any laws (unlike the hunters in Alaska who killed Romeo), the Songhee nation fought to have the wolf returned to them as they were not happy this animal’s life was to be reduced to a pelt and trophy. Wolves are sacred to many first nations people and many others find the hunting of animals for sport and not food unnecessary.

Recommended: Ditch the 9 to 5⸺Learn to Blog for $$$

For some reason, there are wolves that break away from their pack and spend time on the outskirts of human activity. These wolves make themselves known and approach humans, especially those with dogs with a sense of curiosity.

While the accounts of Takaya’s interactions don’t seem to reach the level of playfulness exhibited by Romeo in Alaska (playing with makeshift toys like ropes and foam floats used in boating), they are still quite remarkable.

In all of his interactions, there were no reports of aggression to these dogs. It also appears that humans were not feeding Takaya (same as Romeo). The drive to stick around was perhaps a social need that was not being met. It might have been this social longing that finally led the wolf to leave the island.

Unfortunately, having spent very little of his life around other wolves, Takaya was ultimately killed attempting to socialize the best way he knew how by approaching a dog he encountered on the logging trail probably to touch noses and say hello. It’s stories like this one that remind us that humans still have an uneasy relationship with wolves, one in which we usually fire a bullet first. Can a wild wolf and a dog be friends? I think they can.

11 thoughts on “Can a Wild Wolf and a Dog be Friends?”