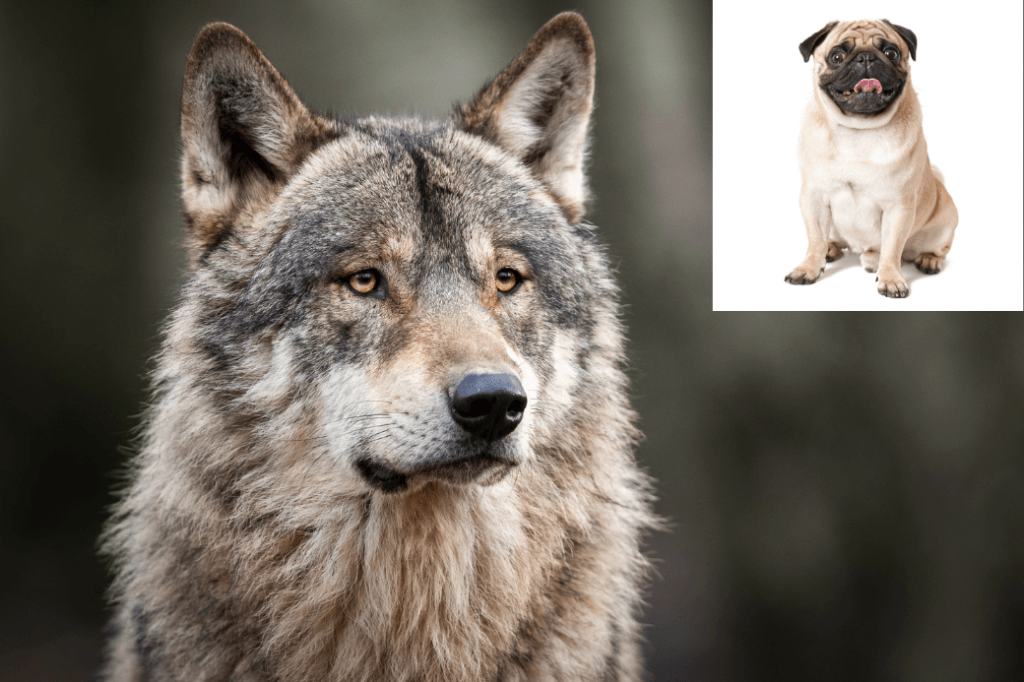 You may have heard of people that own wolf-dog hybrids. These are dogs that have been bred with wolves and contain some portion of wolf DNA. The end result is an animal that is neither a wolf nor a dog and may act like one or the other in different situations. Can a wolf be domesticated? What does domestication even mean? Read on to find out.

Can a Wolf be Domesticated?

Yes, in fact wolves already have been. Domestication is not the same as taming. An individual can be tamed (to live with human owners). Populations as a whole are domesticated and this process takes generations. Wolf domestication resulted in the dogs we call pets today and was the result of natural selection and human intervention (selective breeding). The common ancestor of the modern wolf and the domesticated dog is extinct however.

First, we need to understand the difference between domestication vs taming. Ancient wolf populations have in fact been domesticated but an individual wolf can only be tamed. The end result of domestication is the dog that may be curled up at your feet as you read this article.

It is important to realize that going from wolf to Fido did not happen overnight. In fact, the domestication of dogs took place around 15,000-40,000 years ago over many generations. The exact time frame is still under dispute.

It’s only recently that the number of dog breeds exploded to what you see today. This is a result of humans gaining an understanding of breeding and eventually genetics/DNA.

Natural selection may have favored some wolves to be more friendly with humans who eventually found ways to put them to work and eventually keep them as pets. Make no mistake your Pug is the result of human intervention, not nature.

In fact, the domestic dog would not survive for very long in the same environment a wolf calls home. They lack the instinct and skill to hunt possessed by wolves.

Whatever the common ancestor was between a dog and a wolf, it no longer exists. There are not any living groups of wolves that are more closely related to dogs than another.

While some dogs like the Shibu Inu, the Alaskan Malamute, or the Afghan Hound are considered basal and less domesticated than a Golden Retriever, their genetic lineage still stops well short of wolves.

Taming is something different altogether. A wolf can be tamed. Taming means that it can be trained to live with humans. Most would agree that this is not easy, however, as the animal never loses its wild instinct, and the training required is extensive and more than most people are willing to commit. Even a well-trained wolf will likely remain wary of strangers and not do well with change.

A wolf pup is much like a dog pup⸺both are playful and very cute. People who take these animals as pets are lured into a false sense of security. They assume the wolf can be taught to behave like a dog just as easily.

At around 6 months of age, the instinct of an adult wolf starts to kick in, and the animal also starts to move toward sexual maturity. A dog is genetically wired to want to please its owner. With a bit of coaxing and some treats, you can train a dog to sit, stay, run an obstacle course or even fetch a beer from the fridge.

A wolf could care less about pleasing a human. It may be motivated to be trained by some really good treats, but the result is not always consistent (they may not reliably do what the human trained them to – depends if they want to or not at the moment).

This is why a wolf or a wolf-dog hybrid does not make a good pet for most people and also explains why most pet wolves or wolf-dog hybrids end up abandoned or euthanized.

Whatever the case, some states have outlawed the ownership of wolves and wolf-dogs as pets due to the potential for these animals to become dangerous in adulthood even if the animal has spent all of its life as a “pet.”

In the wild, it is very rare for a wolf to attack a human. It is even rarer for a wolf to kill a person. In most cases of aggression, the wolf was hurt, sick (rabies), or had become habituated to humans who were feeding it.

A wolf’s territory can be more than 100 square miles. Usually, a human can enter a wolf’s territory and never know the wolf is ever there, as avoiding humans is their first choice. Flight over fight. They have plenty of space to retreat.

In captivity, however, they don’t have the opportunity to get away, so the fight instinct takes over. It is more common for humans to be injured by captive or pet wolves. At around the age of 2-4, the captive wolves may start to challenge any other pets the owner might have.

The captive wolf might become very protective or possessive of its owners and show aggression toward other animals or people, it might start destroying property, excessively marking its territory, and escaping. Also, a lone wolf might be in even worse shape since wolves are social animals and the urge to be around its own kind will add to the unwanted behavior. If you are going to have wolves, you should have more than one to provide for this social need.

Are Wolves Easy to Train to be Around Humans?

The short answer is no. There have been conflicting studies of how strong an attachment a hand-reared wolf has toward its human raiser. One study suggested that an adult wolf has no stronger affinity to that person than a stranger.

Another study conducted by The Royal Society and published in June of 2017 extensively studied the issue (Differences in greeting behavior towards humans with varying levels of familiarity in hand-reared wolves (Canis lupus)). They chose to focus on greeting behavior as it is a sensitive measure for wolves. The behavior displayed relies on many complex factors even if the wolf only met a person one time.

They concluded that human-raised wolves could develop individualized relationships with their human-raiser, but that may or may not include an attachment to or dependency on that person. What’s more, the higher level of affiliation displayed toward its human raiser vs. other humans may wane once sexual maturity is reached. Overall, intensive socialization and hand-rearing do increase a general affinity toward humans.

The authors do support the hand-raising of wolves in situations where there are no plans or means to reintroduce the animal into the wild realistically. They caution that unfamiliar people should be careful approaching even an extensively socialized wolf because that animal has competing motivations.

On one hand, it is interested in meeting the new person because of how it was raised, and on the other hand, it still has its instinctual fear of unfamiliar people and situations. This is an animal that is in internal conflict and the behavior can therefore be unpredictable.

Have Humans ever Lived with Wolves

Here are three examples of humans coexisting with wolves in close quarters.

Make Friends with a Wolf

Is it possible to make friends with a wolf? It would be tough to establish any relationship with a wild wolf unless the wolf initiated it (like Romeo in Alaska). Even then, you are probably not friends in the sense that we think of friendship.

Either way, it’s not recommended to try. Habituated wolves that come to trust humans are usually killed (like Takaya in British Columbia). Many people hate and fear wolves and will not hesitate to kill one if given a chance. It’s not illegal to hunt wolves in many places⸺even if that wolf is famous. Some people would kill a wolf even if it wasn’t legal to do so.

With captive wolves, here are some tips from a professional handler to build a relationship:

Final Thoughts – Can a Wolf be Domesticated?

I hope this answered the question of “can a wolf be domesticated”? It would take a long time to take a modern population of wolves and selectively breed them over time to create a domesticated wolf breed that was a docile family house pet.

People do raise pure wolves and wolf-dog hybrids. These animals will never be dogs, however. Even a wolf-dog hybrid with a low content of wolf may still retain some behaviors you would not want from a house pet such as aggression toward strangers and other pets.

These animals do better in spacious enclosures with sturdy high fencing that also extends deep into the ground. A wolf can easily jump over a standard fence or dig underneath it to escape. Owning a wolf or wolf-dog hybrid is a full-time commitment that most people lack the discipline to sustain and in the end, it is the animal that suffers. Wild wolves can be domesticated over many generations, but why should we bother? We already have dogs.

Let wolves remain wild and protect their habitat instead.

2 thoughts on “Can a Wolf be Domesticated?”