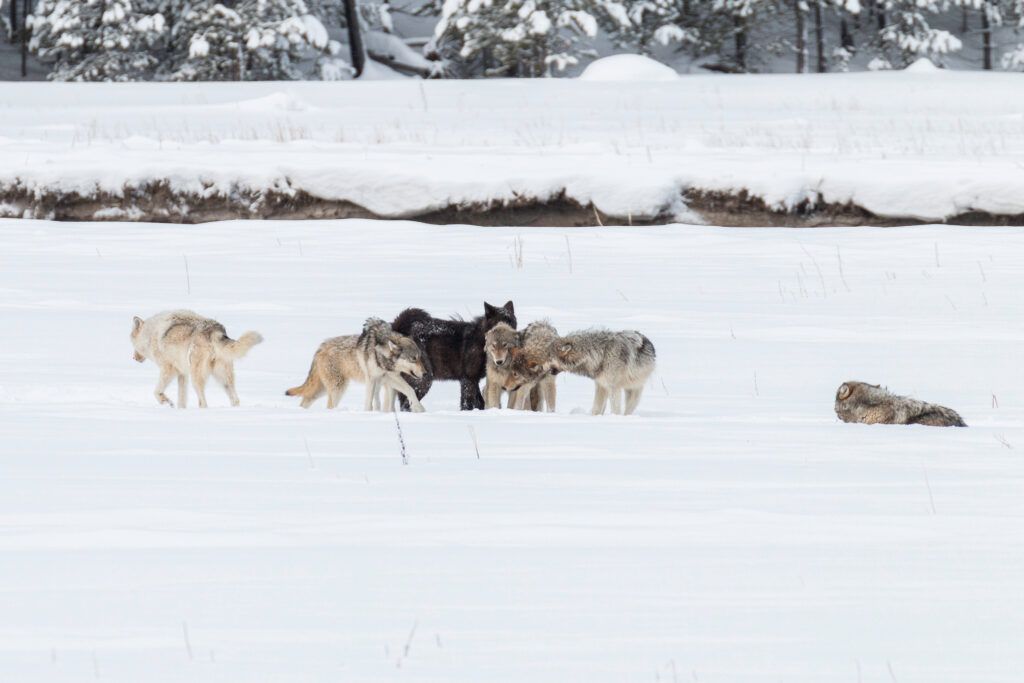 Yellowstone wolves are being killed at an alarming rate outside the park boundaries. Wolves were reintroduced to the park in 1995 from Canada and they have flourished until recently. Why are bordering states to the park threatening Yellowstone Park Wolves’ survival 27 years later?

Absolutely they are. Wolves in Yellowstone are living in a protective bubble like a sovereign nation surrounded by hostile neighbors. Montana used to restrict the number of wolves that could be killed just outside the park but no longer. Idaho is trying to kill 90% of its wolf population and Wyoming allows unrestricted hunting on 85% of its territory. 25 Yellowstone wolves have been killed in 6 months alone after straying from the safety of the park.

In the 1920s Yellowstone’s native wolf population was hunted to extinction. Even though elk had other predators like cougars and bears, the absence of wolves made life much easier for these deer. This was to the detriment of the park’s ecosystem. For example, elk grazed heavily on aspen and willow trees because they were less stressed with no wolves around and stayed in one place for a long time. The lack of these trees in turn made it hard for beavers to build their dams which impacted the rivers. The park was in rough shape by the 1990s and there was only one colony of beavers left.

Then on January 12, 1995, eight wolves were relocated from Jasper National Park in Alberta, Canada. The first wolves to roam the park since the 1920s. By 1996, 31 wolves had been reintroduced. What happened next was a display of how complex and amazing ecosystems are. Even with the wolves, there are more elk in Yellowstone today than there were in the 1960s.

The wolves keep the elk on the move and the trees have time to grow. With more wood for the beavers to build dams, there are now 9 colonies. Beaver dams are important to the rivers because they even out seasonal boluses of water, recharge the water table, and provide cold shaded water for fish.

This is just one example of the positive impacts of the addition of wolves back into the park’s ecosystem.

where is the best place to see Yellowstone wolves?

According to the park’s website, the best place for a chance to see wolves is at Lamar Valley, Hayden Valley, Canyon area, and Blacktail Deer Plateau. In Grand Teton, Willow Flats is the best place. Dawn and dusk are the best times of the day. Yellowstone’s wolves bring $35 million dollars from tourists each year. People travel from all over the world to the only place on the planet they can reliably view wolves in the wild.

how many wolf packs are in Yellowstone?

Currently, in 2022 there are about 90 wolves that roam the park (eight packs) and up to 450 in the Greater Yellowstone area. It’s important to note that wolves that roam outside are not protected.

Most of the park is in Wyoming with smaller sections in Montana and Idaho. These states are very conservative, pro-gun and hunting, and very anti-wolf. Idaho for example has been trying to reduce its wolf population by 90%. Montana and Wyoming have not been much better. Wyoming allows unlimited wolf hunting in 85% of its state.

The plan to bring wolves back to Yellowstone faced fierce opposition as well as overwhelming support. Some complained that their livestock would be killed, the elk population would plummet, and that there would be a dead child within a year. None of that happened.

Cougars came back, coyotes, came back, bears were always there and the elk population is stronger than ever. Yellowstone is thriving now more than it was in the 60s. There should be no controversy but misinformation, old attitudes and a new hatred for this animal by American conservatives led by jackasses like Ted Nugent has made things worse.

What is killing Yellowstone’s wolves?

This year marked the 150th anniversary of America’s first national park⸺Yellowstone. Unfortunately, this year ⅓ of the park’s wolves are now dead. For wolves, Yellowstone is like a sovereign country surrounded by hostile neighbors. Over a period of just 6 months in 2021-2022, twenty-five were killed. Most were killed in Montana when they strayed outside the park boundaries.

American conservatives have declared war on wolves. Even though a judge ruling recently overturned Trump’s delisting of gray wolves the ruling does not apply to Montana, Idaho, and Wyoming. It is in these Republican-led states where most of the wolf hunting — and the most intense fights over wolf management — is playing out. Wolves can now be caught in neck snares, hunted at night, and lured with bait.

Hunting in America has gone from old-timers with wooden stock rifles in LL Bean clothes to douchebags in camouflage with assault rifles and trained dogs ready to run wolves down to exhaustion. These aren’t hunters out to get one animal to add to a collection. These hunters are taking multiple wolves. They are killing because they enjoy killing not hunting. There is no respect for the animal, one of nature’s most spectacular apex predators.

Wolves no longer have any area of grace when they leave the park and enter Montana. There is no longer a limit to how many a hunter can kill just outside the park. Conservative politicians are doing double damage to the ecosystem and the local economy. Unfortunately, it seems like there is a very small number of people killing all these wolves. Such is the way in America where the will of the majority is often overruled by a well-funded and vocal minority. In fact, when Greg Gianforte, the governor of Montana changed this law, there were 26,000 public comments submitted to his office with the majority against the idea.

Killing wolves so aggressively not only hurts conservation and the environment but it impacts the local economies. Tourists travel from all over the globe to see wolves and bring in millions of dollars but if there are no wolves to see then they will stop coming. The Yellowstone tourism industry is already seeing an impact.

The two primary objectives of the National Park Service are nature preservation and visitor enjoyment. These things are impacted by this slaughter of wolves.

The Yellowstone Wolf Project oversees the research and monitoring of Yellowstone’s wolves. In light of the recent development in Montana, the team is trying to collar as many wolves as possible. GPS collars cost $2,500 each and VHF collars cost $600 each. Funds are also needed for monitoring flights for locating wolves in Yellowstone’s vast wilderness.

The program has been around for 25 years and is one of the most detailed studies of a large carnivore in the world. Scientists have gained information on population dynamics, predator-prey interactions, ecosystem impacts, and a lot more. The work serves the park’s mission to understand and preserve native species and ecological processes, and informs wolf conservation efforts worldwide.

Yellowstone’s wolf reintroduction hasd been a success. They have helped to restore balance to the ecosystem and have brought millions of dollars in tourist money to the area. All of this is now under threat by conservative politicians in the neighboring states representing a small but vocal minority intent on killing off all the wolves. It would be a shame for Yellowstone’s wolves to be the victim of American political discourse.