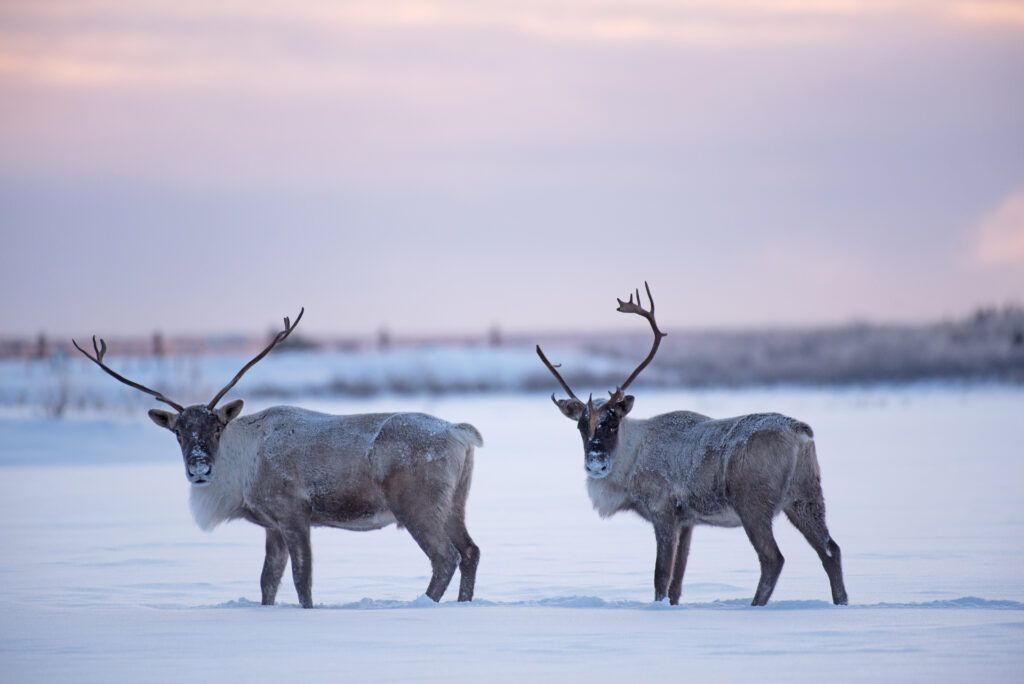 Caribou is a traditional food source for many people in Canada’s Yukon Territory. There are a lot of caribou in the territory but the Yukon is vast and some areas have seen declines in local herds. A study was conducted recently to see what impact wolves were having on the recovery of these herds and to answer the question “are wolves a threat to Yukon Caribou?”

Are Wolves a Threat to Yukon Caribou?

The preliminary result from a recent study seems to be NO. Researchers found that wolves in the Southern Lakes area of the Yukon eat moose 75% and caribou 25% of the time. In fact, caribou herd numbers have been increasing despite wolves.

The pack must travel long distances in the rough country to even find a moose let alone one that they would put in the investment of time, energy, and maybe even risk injury to take down. The moose does not go quietly into the night let’s say. It can run up to 30 km/hr (19 mi/hr) and very much does not want to be dinner for a pack of wolves.

Wolves ideally look for the weak and the old individuals rather than take on a strong and healthy one which is a more dangerous endeavor. Often the hunt takes place in freezing temperatures, snow, and darkness⸺by no means is it an easy meal.

Wolves can eat up to 20lbs in one sitting. After a large kill like this, the pack will gorge themselves, digest, and repeat until the carcass is consumed. It can take the better part of a week to eat a large moose.

What’s Happening to the Caribou in the Yukon?

The land is open and trees are sparse which allows the caribou ample opportunity to see predators. These large herds move between calving grounds, and summer feeding in the north to the winter grounds in the south. The diet consists of lichen, forbs, grasses, sedges, willows, and mushrooms.

Recently, people living in the Southern Lakes area of the Yukon have become concerned with the number of caribou killed by road collisions and predation. Since humans are not likely to change their habits the focus for some narrowed on predation. Predation concerns usually get irrationally weighted toward wolves while other predators who may actually kill more of the caribou raise less concern.

Unlike the large populations found elsewhere, this area had seen a decrease in numbers of caribou to just a few hundred in the 1990s. The people in this area have a long relationship with caribou and have hunted them for hundreds of years. Now they were being told that hunting is restricted. Obviously, they want to see the numbers rebound. Wolves do eat deer of all shapes and sizes but are wolves a threat to Yukon caribou numbers?

Why the Locals May not Need to Worry About Wolves

A study was conducted over a three-year period and early results determine that wolves do kill some caribou but not enough to make a difference. In fact, the herd numbers in the area have been increasing despite wolves. The study also found that the wolves studied killed moose 3 times more often than caribou.

As mentioned above, a moose can sustain a whole pack for almost a week. In comparison, a caribou (which is much smaller) sustains a pack for 2-3 days. Wolves seem to prefer moose over caribou.

The very presence of wolves may also be helping to protect caribou from death by automobile. A study in the Great Lakes Area of the US, also found that wolves potentially reduce vehicle collisions with deer. Deer like to come up to the roadways, either to cross or to lick the salt left from ice and snow clearing.

In the Great Lakes area, wolves will often use man-made roads, and paths to travel faster and seek out prey. The presence of wolves near roadways keeps deer wary and on the move and they are less likely to stay near the roads for very long.

I grew up in Newfoundland and have seen this for myself. This Canadian province has no confirmed wolf packs and every year there and many collisions with Moose (which are more plentiful there than Caribou). The deer here simply have no fear of predators. I have seen 5 moose at a time just hanging next to the highway as well as having to stop my car so that 50 or more caribou can cross the road.

Are wolves a threat to Yukon Caribou? It seems like they are having little to no impact. More studies are needed to truly establish the effect wolves have on caribou populations as well as vehicle collisions with the deer. This information would help to guide wildlife officials when determining how to balance the predator-prey populations.

Too often in places where wolves are found, the lazy and ineffective solution is to blame wolves and reduce their populations or attempt to exterminate them altogether.

Winter is here in Oregon. Last year we lost power at least three times during the coldest months of the year. Once it was out for almost a week. I’ve been searching for a ready-made kit to get my family through a natural disaster. Nobody does emergency/disaster preparedness like Judy.

They have guides for everything from fires and floods to tornados and hurricanes. Their kits come with first aid supplies, food, crank radios, power stations, and absolutely everything you might need to get through a tough spot. I plan on getting the Power Prepper bundle myself. Order yours today, your family will thank you.