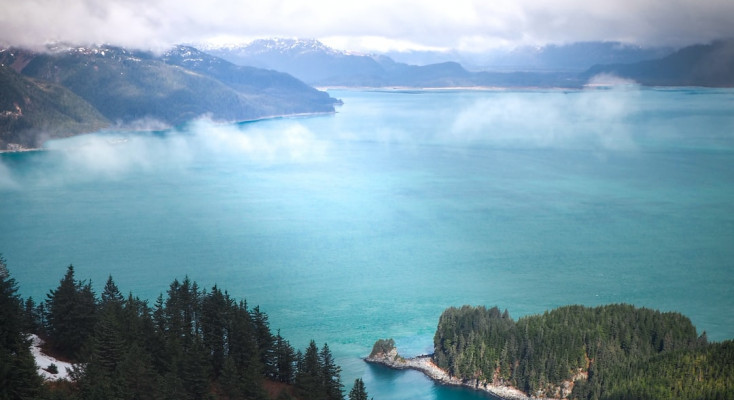 If you read my previous article about the Coastal Wolves of British Columbia, you’ll remember that I mentioned, “Other populations reside in southeastern Alaska, though overall, sea wolves have declined in number over time. Amazingly, they once were found all the way down to California, back when it had its own temperate rain forest. Now they only go as far south as just north of Vancouver.” In this post, I’m going to explain the challenges faced by the Alexander Archipelago Wolf of Alaska. Read on to find out more…

What’s so Special About the Alexander Archipelago Wolf of Alaska?

These wolves are considered genetically distinct from the gray wolves found elsewhere in North America. The Alexander Archipelago wolf is smaller and darker than the typical gray wolf, with a denser coat. On average, individuals weigh between 30 to 50 pounds, are 3.5 feet long, and stand around two feet high. They typically have a black or very dark gray coat.

Adult wolves are sexually mature between two and three years of age. Pups are usually born from mid-April through early July, with each litter consists of three to seven pups.

On average, wild wolves live for six to eight years.

Photo by Cory Thorkelson on Unsplash

Where is the Endangered Alexander Archipelago Wolf Found?

The Alexander Archipelago Wolf (Canis lupus ligoni) resides on the islands and the nearby mainland, located in the image below. The overall wolf population scattered amongst these islands and the nearby mainland is likely less than 1000 animals. They occupy much of southeast Alaska from Yakutat Bay to the Dixon Entrance except for Admiralty, Baronaf, and Chichagof islands. The challenge is that geographies like water and mountain barriers separate these populations, and each sub-population can have varying levels of viability genetically.

Already rare, these wolves are at risk from high levels of inbreeding. Trapping activities have killed off half the population on Prince of Wales Island alone. Making matters worse, the Trump administration opened hundreds of thousands of acres of the wolf’s forest habitat to clearcut logging in 2020.

The US Fish and Wildlife Service announced this week (week of July 25, 2021) that the Alexander Archipelago wolves might warrant protection under the Endangered Species Act because they are being threatened with extinction from logging activities and increased trapping.

The disappointment that is American politics is creating chaos for wildlife conservation. Science is once again respected in 2021, but there’s no guarantee that it will be under any new administration in 2024 or 2028. An anti-science administration might take pleasure in undoing any progress made for no other reason than pandering to pundits (i.e., Tucker Carlson no longer has a permanent look of confused rage) and a base that equates helping anything or anyone with socialism.

Here is what I mean….

Why is Road Builiding a Threat?

Building roads is bad for wolves because it gives access to hunters and trappers to explore further into the wolf’s territory. We saw in Wisconsin how people who call themselves hunters chase wolves down with dogs (swapping out fresh hounds every 6 hours), use GPS technology, snowmobiles, and hunt at night to run wolves to the point of exhaustion.

That isn’t hunting, the advantages are too great, and the wolves don’t stand a fair chance; It’s just killing. Idaho, for example, allows poison baits and killing a mother and her pups in the den. I mean, who would kill what looks and acts like a puppy and then call themselves a hunter after that? No one with any respect for nature, that’s for sure.

Giving access to areas previously safe to wolves means under future administrations that mismanage wildlife resources, makes annual slaughters like this possible on the Alaskan islands.

Protections Restored to the Forest but not the Wolves

The wolf’s low numbers, mismanagement of trapping, damage from past national forest logging, continued intensive logging of old forests on state lands, and likely inbreeding means the animal is still threatened with extinction. These wolves need the protection of the Endangered Species Act.

This protection was last denied in 2016 because of the stable populations of the wolf in coastal British Columbia. I don’t think it makes sense to base our decisions on the population in Canada, and it’s not like the Coastal Wolf of BC would ever be able to impact the wolf population in Alaska (due to geography) without human intervention and cooperation of the Canadian Government. Not a great plan.

Thanks to a petition from Defenders of Wildlife, the Center for Biological Diversity, and Alaska Rainforest Defenders. These wolves might stand a chance of survival as the Federal Government is reconsidering endangered species protection status. Hopefully, the FFWS goes from saying these wolves MAY warrant protection to they DO require protection.

How Can you Help?

Let’s not let the light go out for the Alexander Archipelago wolf of Alaska.

The wolves of the Alexander Archipelago are like wolves everywhere in that they are trying to survive. Still, man is destroying their habitat, hunting and trapping them, and the respective government authorities can’t seem to figure out a permanent solution to manage them. They are victims of our greed, destructive ways, disrespect of nature, and political bickering.

Alaska – Cool things to Do

6 thoughts on “Endangered Alexander Archipelago Wolf – Is Extinction Next?”